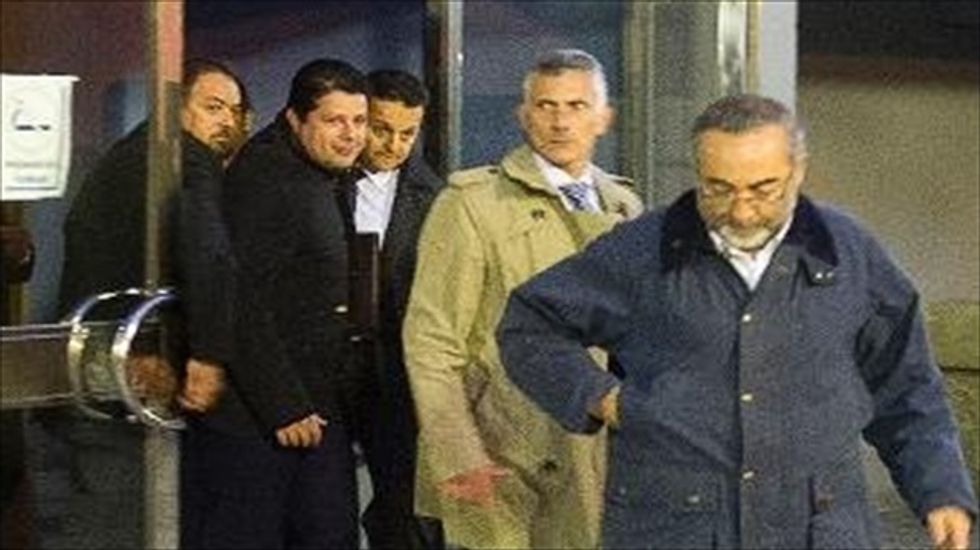 Chief Minister of Gibraltar Fabian Picardo (2ndL) is escorted out of Algeciras university after his conference was disrupted by students and fishermen on Nov. 28, 2013 [AFP]

Spanish activists and fishermen hurled insults Thursday at the political chief of Britain's outpost of Gibraltar, preventing him from speaking to law students in Spain.

Several dozen Spanish protesters including activists and fishermen joined in the rowdy rally against Gibraltar Chief Minister Fabian Picardo at a time of high tension over the sovereignty of the "Rock".

A group of young men and women, some with their faces covered, unfurled banners and Spanish flags while hurling insults and chanting "Gibraltar is Spanish" at the event in a faculty in Algeciras, across the bay from Gibraltar.

Fishermen from the Spanish ports of La Linea and Algeciras joined in, shouting that Picardo and Gibraltar had ruined their livelihoods.

After about 20 minutes of angry scenes, organisers from the University of Cadiz cancelled the event, citing safety concerns.

"The visible level of hate and violence I witnessed was frankly remarkable. I sincerely believe that we should be talking to resolve the political issues between us," said Picardo, a lawyer by profession.

"Violence and intolerance will not achieve anything. It will certainly not change my pro-dialogue views," he said.

The conservative Popular Party-run Algeciras city council had opposed the invitation for Picardo to speak to students. Socialists members of the council, however, defended the event as a matter of academic freedom.

Spain ceded Gibraltar to Britain in perpetuity in 1713 but has long argued that it should be returned to Spanish sovereignty, and the territory remains a source of diplomatic tension.

Gibraltar dropped 70 concrete blocks into the sea in July, saying it aimed to create an artificial reef. But the barrier also prevented Spanish fishing boats that trawl for shellfish from operating in the area.

Spain then introduced stringent border checks in August, leading to lengthy delays for motorists trying to enter the tiny territory on the southern tip of Spain.

This month, Britain called in the Spanish ambassador over a "provocative" day-long stand-off in which a Spanish state research vessel defied Royal Navy orders to leave waters Gibraltar claims as its own.

In the latest spat, Prime Minister David Cameron said this week that Spain had promised there would be no repeat of an "extremely serious" incident in which its officials searched British diplomatic bags at the Gibraltar border.