Stewart on coke-sniffer Rep. Trey Radel: Being a hip-hop conservative just as ridiculous as being a 'smooth-jazz anarchist' or a 'disco Nazi' 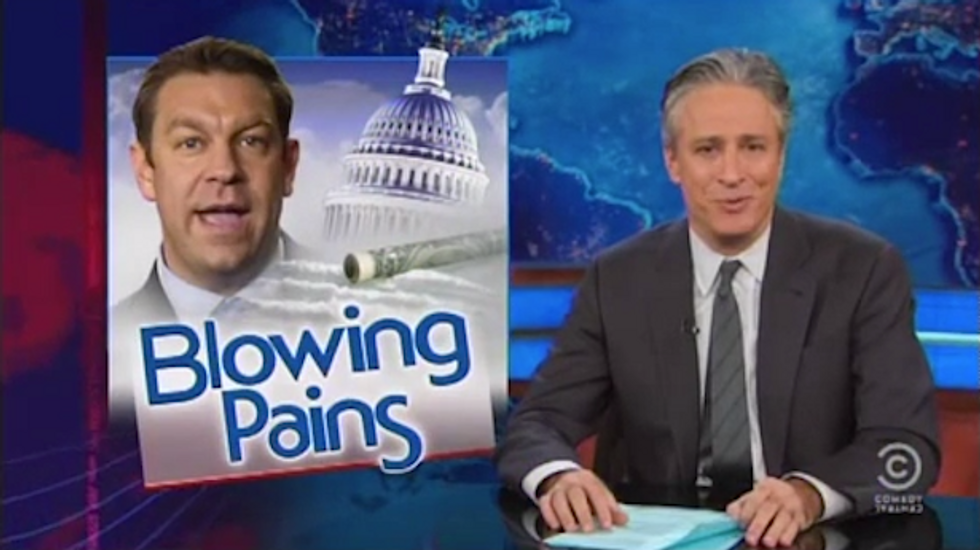 First-term Rep. Trey Radel (R-FL) pleaded guilty Wednesday to charges of cocaine possession and was sentenced to one year of supervised probation after he bought the drug Oct. 29 as part of a sting operation.

Stewart asked Wednesday night on “The Daily Show” whether there were any indications that Radel might be involved with cocaine use and played a news clip that reported a blog post by the lawmaker, who said his favorite vacation spot was Cartagena, Colombia, once a hub in the country’s notorious narcotics trade.

The comedian blinked and stared dumbfounded at the camera. “Were there any signs? Anything?” Stewart asked. “Anything that could have tipped us off that he was a cocaine user? Anything you found? Anything?”

He lampooned the 37-year-old Radel’s arguments that hip hop music displayed a conservative message, citing an television interview where the lawmaker claimed Public Enemy’s song, “Fight The Power,” was about a heavy-handed federal government.

“It has nothing to do with that; it’s about entrenched racism” Stewart said, joking that group member Flava Flav wore a “debt clock” around his neck and that the group 2 Live Crew’s song, “Pop That P*ssy,” could be an ode to traditional marriage.

Stewart said being a hip-hop conservative was just as ridiculous as being a “smooth-jazz anarchist” or a “disco Nazi,” and he joked that Radel had explained more of his political-musical theories in the book, “I Do Not Understand Rap Music.”

The worst aspect of Radel’s arrest, Stewart said, was that he used illegal drugs himself while supporting legislation that would require food stamp recipients to pass a drug test before receiving benefits.

“No hypocrisy there, it’s not like he receives any taxpayer funds for his salary,” Stewart deadpanned. “Oh. Right.”

Stewart said Radel had two choices: He could admit his mistake and seek help or he could deny he’s at fault as loudly as possible while knocking over cameramen and elderly legislators.