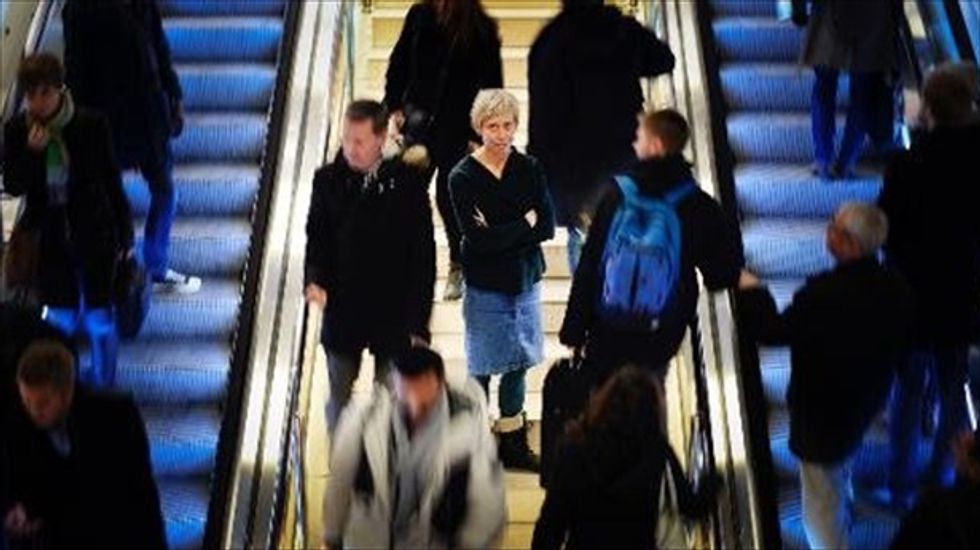 Lina Afvander (center) shown in Stockholm on Nov. 15, 2013, is required by law to tell sexual partners she is HIV-positive [AFP]

When Lina Afvander got her HIV diagnosis, it came with a set of prescriptions and a disclosure obligation, which legally requires HIV-positive people in Sweden to reveal their status before having sex.

"My strategy is that I don't expose myself to this situation that often, I just don't have that much casual sex," the 35-year-old Swede said.

"I wait until I can trust the other person, until I know it's someone who can handle this."

Quite a bitter pill to swallow in itself, an HIV diagnosis in Sweden also brings with it the risk of criminal prosecution if the legal responsibility, intended to prevent the spread of the virus, is not met.

But Sweden's use of criminal law in HIV cases, one of the most stringent in the world, is now being challenged as experts argue that people on effective anti-retroviral therapy have an extremely low risk of transmitting the disease.

The debate around HIV criminalisation has been highlighted by the run-up to World AIDS Day on Sunday.

In Sweden a failure to comply with the HIV disclosure obligation, followed by unprotected sex, can result in charges of attempted aggravated assault and a prison sentence, even if the virus is not transmitted.

Thus people with HIV cannot legally have unprotected sex in any circumstance -- even if they reveal their HIV status and have the full consent of their uninfected partner, since a person cannot consent to an assault.

Around 6,500 people are HIV-positive currently in Sweden and 90 percent of them are on an effective anti-retroviral therapy.

According to the 2010 Global Criminalisation Scan Report, published by the Global Network of People Living with HIV, Sweden has the highest rate of HIV-related convictions in the world, with 6.12 sentences per 1,000 people living with the virus, 60 times more than France and 24 times more than the United States.

A court of appeal cited a report from the National Centre for Communicable Diseases Control (SMI) to acquit an HIV-positive man sentenced to one year in prison for having unprotected sex with four women who never contracted the virus.

"Patients who are on effective anti-retroviral therapy are in essence non-infectious when it comes to sexual contact," said Jan Albert, professor of infectious disease control at Karolinska Institutet and one of the authors of the report.

The report argued that prosecution was wrong as the risk of transmitting the virus is extremely low. It debunked the myth that HIV-positive people who are aware of their condition and take medication are the ones spreading the disease.

"The evidence is still not 100 percent proved in all settings," Albert said, referring for example to cases where the presence of other sexually transmitted diseases like chlamydia or gonorrhoea can increase the risks of HIV transmission.

Sweden, which is often praised in international forums for its gender equality policies, does not comply with the recommendations of the UNAIDS programme, which advocates that "non-disclosure of HIV-positive status and HIV exposure should not be criminalised."

While Swedish rights organisations have criticised the law, the legal status of HIV may mirror general beliefs that are widespread among Swedes.

According to the latest SMI report which assesses attitudes towards HIV since 1987, 40 percent of Swedes in 2011 believed HIV-positive people should avoid having sex altogether.

"These figures are insane," Nakunzi said.

"We have this tendency to think: if you have HIV, you have to tell me or the police will come and get you."

Matthew Weait, professor of law and policy at Birbeck College and an expert on the impact of law on HIV prevention, also thinks the regulation has to do with Swedish mentality.

"Swedes report that they are more likely to trust a stranger than distrust him or her, so if there is a perceived violation of trust, the response will be more extreme," he said.

"And if one couples this with the high levels of trust which Swedes have in their legal system, it is perhaps unsurprising that they will readily turn to the law for a solution."

The country's two main political parties have yet to take a clear stand on the matter.

Swedish organisations campaigning for a change in HIV criminalisation, such as Hiv-Sverige or the Swedish Association for Sexuality Education, see the acquittal in October as a promising breakthrough.

However, in late November the national prosecutor appealed the ruling to the Supreme Court, which may be another sign that the regulation is deeply rooted in Swedish culture.

For Afvander, directly affected by the law, disclosure should be left as a moral obligation.

"I think there is a lot you should tell before you have sex, but it should not be legislated," she said.

"If I were the other one, I'd like to know, so I guess I have a moral disclosure obligation."