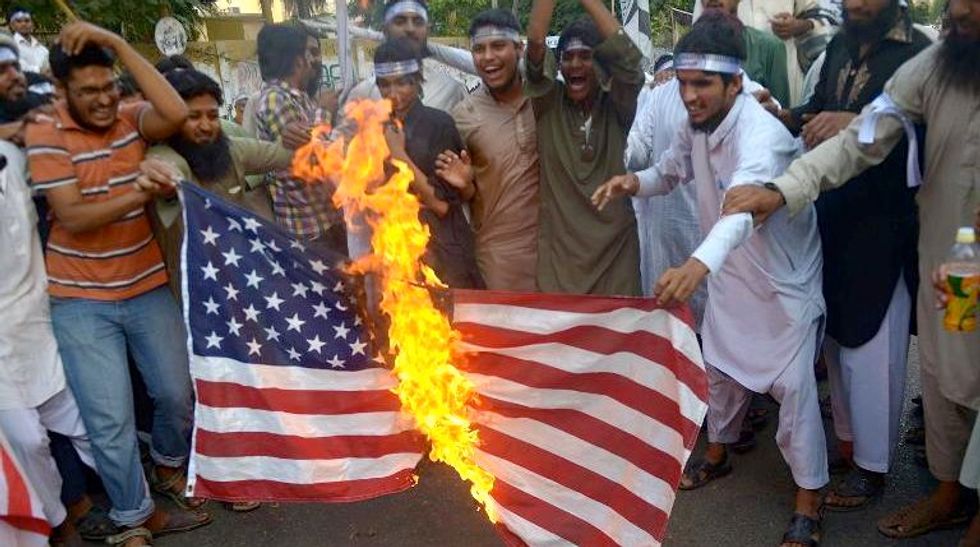 Tribesmen opened fire on a US drone over Pakistan's troubled tribal belt on Saturday where Pakistani Taliban commander Hakimullah Mehsud was killed by a drone strike a day earlier, residents and officials said.

Mehsud, who had a $5 million US government bounty on him, died along with four others on Friday when a US drone fired two missiles at a vehicle in a compound in the village of Dandey Darpakhel, five kilometres (three miles) north of Miranshah, the main town of North Waziristan.

His death came as a major blow to the militant network and cast doubt over proposed peace talks, with fears of reprisals.

Local residents told AFP that dozens of tribesmen and militants had opened fire on a US drone which was flying low in the same area where the Taliban chief was killed.

"Tribesmen and militants were firing with light and heavy guns for an hour," Tariq Khan, a shopkeeper in Miranshah told AFP.

A security official in Miranshah confirmed the firing.

The official and residents said Mehsud was buried late Friday along with the four others killed -- his bodyguard, driver, uncle and a commander, according to a senior Taliban source.

The usually busy Miranshah bazaar opened on Saturday but shoppers stayed at home.

"Local people are scared. The death of Hakimullah Mehsud has created uncertainty. Everyone is talking about Taliban revenge," Khan said.

Nisar Khan Dawar, a grocery store owner in the same bazaar said he had not received a single customer on Saturday.

North Waziristan is one of seven semi-autonomous tribal regions along the Afghan border, which Washington considers to be a major hub of Taliban and Al-Qaeda militants plotting attacks on the West and in Afghanistan

Mehsud's death represents a success for the CIA’s drone programme targeting suspected militants at a time when it is under intense scrutiny over civilian casualties.

It is the second significant blow to the Tehreek-e-Taliban Pakistan (TTP) in a month, following the capture of another senior commander by US forces in Afghanistan.

Security expert Rahimullah Yusufzai told AFP it was unclear whether the TTP has anyone in its ranks capable of filling the gap left by the charismatic Mehsud.

"His death will weaken the movement. Although they will soon appoint a new chief it is to be seen how effective the new person will be in controlling things," Yusufzai said.

After a bloody six-year TTP insurgency which has left thousands of soldiers, police and civilians dead, the government has been edging towards talks with the militants.

Mehsud's death came just a day after the government said the "process of dialogue" with the Taliban had started but no formal talks had taken place. The militants said they had had no contact from the government.

Saifullah Khan Mehsud of Islamabad's FATA Research Center, an expert on Pakistan's tribal belt, said the killing of the Taliban commander would disrupt the peace process in the short term but could ultimately prove beneficial.

"Of course for the time being there will be perhaps... a call for an end to the dialogue process, but in the long run a divisive figure like Hakimullah Mehsud not being there will make the environment more conducive for peace negotiations."

Mehsud took control of the TTP after a bitter fight for the leadership following the death of founder Baitullah Mehsud in a drone strike in August 2009. Hakimullah Mehsud was widely reported to have been killed in 2010 but later resurfaced.

Seen as a hardliner, he oversaw some of the TTP's most high-profile attacks including the attempt to kill schoolgirl education activist Malala Yousafzai in October last year.

The United States charged him with terrorism after seven Americans were killed in a suicide attack at a CIA base in Afghanistan in December, the deadliest attack on the agency since 1983.

Since 2004, the United States has carried out hundreds of missile attacks from unmanned aircraft targeting suspected Taliban and Al-Qaeda linked militants in the tribal areas.

The number and identity of casualties is hard to determine as the tribal areas are off limits to foreign journalists and aid organisations, but the London-based Bureau of Investigative Journalism estimates deaths at between 2,500 and 3,700.

The Pakistani government officially condemns drone strikes as a violation of its sovereignty and last week Sharif urged US President Barack Obama to halt the programme during a meeting in Washington.

Despite their deep unpopularity in Pakistan, the US sees them as a vital tool in the fight against militants in the lawless tribal areas.