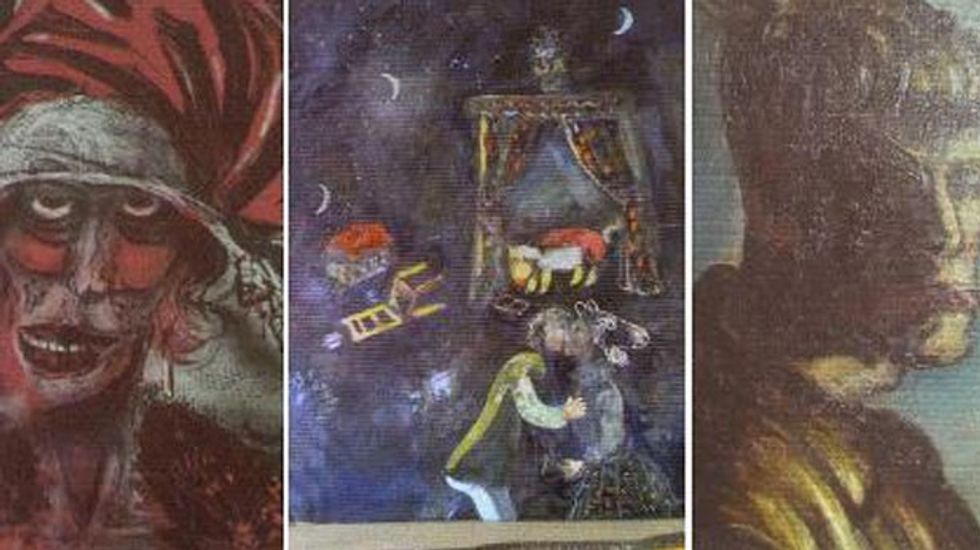 Previously unknown masterpieces by modernist painters Marc Chagall and Otto Dix are among a vast trove of works believed stolen by the Nazis and uncovered in a Munich flat, an art historian said Tuesday.

Breaking two days of silence following the revelation of the spectacular discovery, Meike Hoffmann, the chief expert aiding the investigation, said the Chagall painting, an allegorical scene dating from the mid-1920s, had a "particularly high art-historical value".

The Dix work is a rare self-portrait believed to have been painted in 1919, she added.

Hoffmann showed slides of the paintings, which also include works by Pablo Picasso, Pierre-Auguste Renoir and Henri Matisse, at a news conference in the southern city of Augsburg where the German authorities shed light on the extraordinary find in the apartment of an eccentric elderly loner.

The man, identified as Cornelius Gurlitt, is the son of Hildebrand Gurlitt, a prominent Nazi-era art dealer who acquired the paintings in the 1930s and 1940s.

Hildebrand Gurlitt had been one of a handful of art experts tasked by the Nazis with selling valuable artworks stolen from Jewish collectors or seized among avant-garde works deemed to be "degenerate".

Augsburg chief prosecutor Reinhard Nemetz said 1,285 unframed and 121 framed paintings, sketches and prints were found in the rubbish-strewn flat, some dating back to the 16th century.

Focus magazine, which broke the story this week, had reported that the collection comprised 1,500 works worth an estimated one billion dollars ($1.3 billion).

Nemetz declined to comment on the possible market value of the Munich stash.

Determining which works were looted from Jewish collectors by the Nazis or taken from them under duress for a fraction of their value would be a lengthy process, Hoffmann noted.

In a moment of high drama at the news conference, Hoffmann flicked through a handful of slides in the darkened room showing works that had not been seen in public in seven decades.

They included a groundbreaking Expressionist horse painting by Franz Marc, a vivid portrait of a seated woman by Matisse and a touching image of a girl holding a goat by 19th century French master Gustave Courbet.

The Dix painting is a haunting image of the German artist's gaunt face just one year after World War I, a conflict in which he fought and whose horrors left him traumatised, shaping his work until his death in 1969.

Hoffmann said finding the works, many of which were thought lost forever, was "of course an extraordinarily happy feeling", adding that the new discoveries would advance art research.

The authorities failed to explain why they had kept the discovery under wraps.

But Nemetz said they had no plans to post an exhaustive list of the works online because it could violate the privacy rights of those staking claims of ownership.

Siegfried Kloeble, head of the customs office in Munich, which launched the investigation against Gurlitt on suspicion of tax evasion and misappropriation of assets, said the works were now stored at a secret location and not, as reported in German media, at a customs warehouse outside Munich.

"The paintings were stored professionally and in very good condition," he said, adding that although some appeared soiled, none were damaged.

Nemetz said the elderly recluse had cooperated with the authorities when the works were seized but said they were "not in contact with him currently" and that there was no warrant for his arrest.

His whereabouts are unknown

Gurlitt's official residence is in Austria and not Munich, where the art was found.

Nemetz also disputed a key point of the Focus report -- that the raid had already taken place in early 2011 and that the authorities had kept mum since then.

He said that although the investigation started in 2011, the search of the apartment had begun on February 28, 2012 and continued for three days.

He said they assume that Gurlitt has no more hoarded art hidden in other locations despite speculation in the German press.

The Nazis plundered artworks in Germany and across Europe before and during World War II.

Thousands of stolen artworks have since been returned to their owners or their descendants, but many more have never resurfaced.

Jewish groups have called for an exhaustive search for the provenance of the paintings found in Munich, at least 200 of which were officially reported missing.