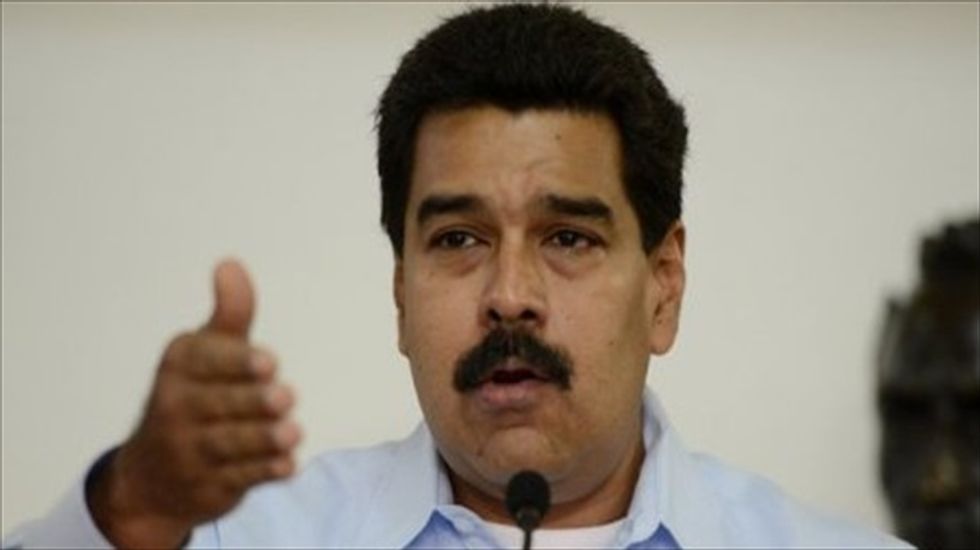 Venezuelan President Nicolas Maduro talks during a press conference at the Miraflores Presidential Palace in Caracas on Sept. 9, 2013. [AFP]

Maduro delivered the warning in a nationally televised address that laid the ground for tougher enforcement of a three-week-old crackdown on actions seen as fueling Venezuela's soaring inflation.

He urged authorities who find retail prices that have been raised "to act with all the severity of the law and, because they are crimes in flagrante, to proceed immediately to detain those responsible."

"We are going all out. We are taking measures with even more authority," he said.

The latest declarations came with Maduro facing a key test of political strength on December 8, when municipal elections will take place in the midst of a burgeoning economic crisis.

It will be the first elections since Maduro succeeded his political mentor, late leader Hugo Chavez, in April elections whose tight results the opposition has refused to recognize.

Inflation is running at 54 percent a year, shortages of basic goods are widespread despite the country's oil wealth and a hard currency crunch wreaking havoc on the import-dependent domestic economy.

Earlier this month, Maduro fired what he called his first salvo in an "economic war against the bourgeoisie and imperialism," the latter a reference to the United States or US interests.

This unleashed a tumultuous early start to the Christmas shopping season with Venezuelans mobbing consumer electronic stores for windfall bargains.

The National Assembly then granted Maduro special decree-making powers, which he immediately used to impose price controls and cap profit margins at 30 percent.

Maduro was scheduled to hold a working meeting later Friday at the presidential Miraflores Palace that was expected to produce his next set of economic initiatives.

The federation of commerce chambers Fedecamaras, which represents private business and is frequently at odds with Maduro, urged him to stimulate production by guaranteeing respect for private property and access to hard currency.

Critics have blamed the government's strict currency controls for exacerbating Venezuela's price distortion and fueling a black market for dollars.

Fedecamaras president Jorge Roig said more than 200,000 businesses have had to shut their doors in the past decade.

He complained that only two percent of companies are receiving dollars at a preferential official rate of 6.3 bolivars to the US currency, though the government insists that greenbacks are being distributed to businesses.

"We need measures that are not improvised, which encourage production in Venezuela, which don't think only in the short-term," Roig said Thursday.

"We need measures that are part of a discussion with all businesses."

Maduro countered that Fedecamaras was a "coup-monger," recalling that the business group had backed Chavez's ouster in a short-lived 2002 coup.

"We have forced them to get out of their lair," he said. "It's the same Fedecamaras... which headed the coup d'etat against comandante Hugo Chavez in April 2002."