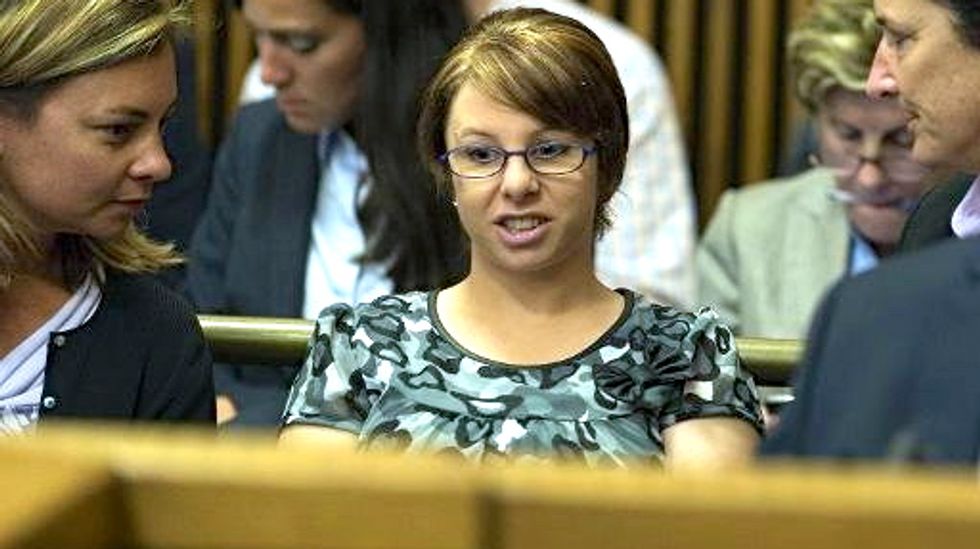 With her chin held high against the inevitable tears, Michelle Knight on Tuesday described 11 years of captivity spent naked and chained in what came to be known as Cleveland's "house of horrors."

It was the first public interview given by any of the three women who were held captive by rapist Ariel Castro since their dramatic escape on May 6.

Knight was the first to be snatched off the street in 2002, when she was 20 years old.

In a paid interview with the "Dr. Phil" show, the diminutive woman described how Castro had been hoping for a younger victim.

"He thought I was a 13-year-old prostitute. When he found out my real age, he got mad," Knight said.

The women escaped when Berry managed to break open part of the front door and call out to a neighbor for help. She emerged from the dilapidated house with her young daughter who was fathered by Castro during her captivity.

More than 92 pounds of chains were found in the filthy, darkened home where the women were kept in locked rooms with boarded-up windows.

Castro, 53, pleaded guilty on August 1, after prosecutors agreed not to seek the death penalty. He hanged himself from the window of his prison cell a month later.

Knight, who was also the only victim to speak at Castro's trial, reportedly suffered the worst abuse. Court documents described how Castro forcibly terminated five of her pregnancies by beating and starving her.

In the first of two taped episodes, she told psychologist host Phil McGraw that Castro blamed her for the first miscarriage after he slammed a barbell into her stomach.

"I cried daily, and he would always yell at me for crying," she said.

Knight said she could often hear visitors in the home, but Castro prevented her from calling for help by stuffing a "dirty, nasty sock" in her mouth and covering it with duct tape.

Castro would also talk to her about his desire to kidnap other girls and tell Knight she "wasn't the first," and leading her to believe that a previous victim had been killed.

"I begged him not to bring any more there to suffer the hell I went through," she said.

Knight was embarrassed when Castro first brought fellow captive Berry to see her because she had nothing to cover her nakedness but a sheet and had only been allowed to shower once in a year.

The two women were kept in separate rooms, never left alone together and were afraid to call out to each other, Knight said.

Knight said knew another girl had been kidnapped because she could hear DeJesus's screams from the basement.

"I had to help him drill holes in the wall to put the chains through to hook us together," she said.

At one point, Castro allowed Knight to briefly have a dog.

"One day my dog decided to protect me, bit him and he broke his neck right in front of me," she said. "All I heard was a yelp and he was gone."

Asked if she had ever wished for death in her horrific ordeal, Knight said the thought of her son -- who was 2 years old when she was kidnapped -- gave her the will to survive.

"That would be taking the easy way out," Knight said.

"I want my son to know me as a victor, not a victim, and I want him to know that I survived, loving him. His love got me through."