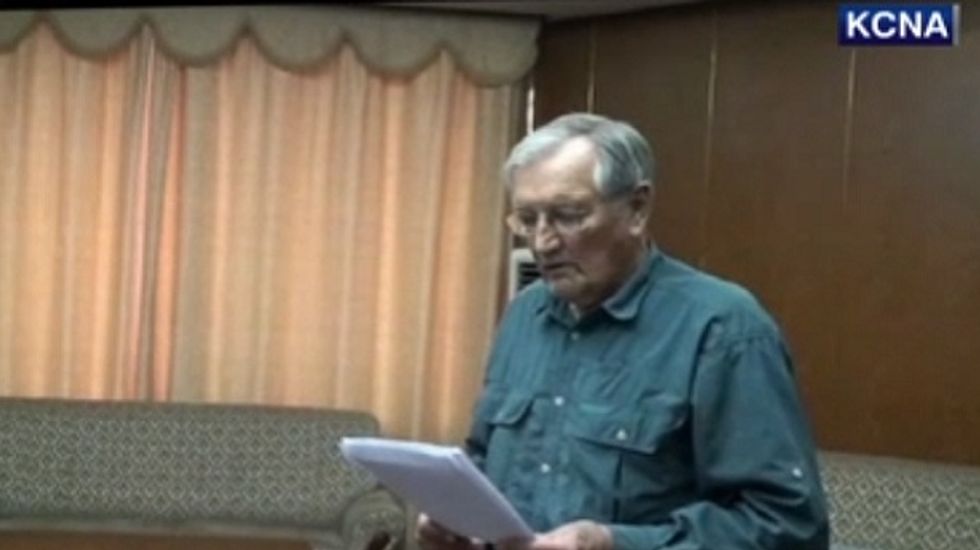 US officials said Merrill Newman, an 85-year-old from California, headed home after arriving in Beijing.

North Korea deported him "from a humanitarian viewpoint", its official Korean Central News Agency said, citing his "sincere repentance" as well as his age and health condition.

His release came hours before Biden visited the demilitarised zone which has split the Korean peninsula since the 1950-1953 Korean War.

Wearing a baseball cap and brown bomber jacket, Biden visited a front-line hilltop observation post and surveyed the North Korean landscape through a pair of binoculars.

"The DPRK (North Korea) today released someone they should never have had in the first place, Mr. Newman," Biden said earlier after laying a wreath at the war memorial in Seoul.

"It's a positive thing they've done," said Biden, visiting South Korea as the last stop on a three-country Asia tour that has already taken him to Japan and China.

Biden also urged Pyongyang to free another US citizen, Kenneth Bae, a 45-year-old tour operator who was arrested a year ago and sentenced to 15 years' hard labour on charges of seeking to topple the government.

Biden said Bae was being held for "no reason" and "should be released immediately". Newman, who has a heart condition, was plucked off a plane in October as he was leaving Pyongyang following a tourist visit.

His family said he was detained on October 26 shortly before take-off from the North Korean capital. Biden's office said the vice president had spoken to him by telephone.

"I offered him a ride home on Air Force Two, but as he pointed out, there's a direct flight to San Francisco, so I don't blame him, I'd be on that flight too," Biden told reporters.

Newman told reporters at Beijing airport that he was "very glad to be on my way home", according to the South's Yonhap news agency.

Asked about the first thing he planned to do, the veteran said he would "go home and see my wife", Yonhap said.

AFP learnt from the US embassy in Beijing that Newman had departed for the United States accompanied by a consular official.

"We are pleased that Mr Merrill Newman has been allowed to depart the DPRK and rejoin his family," US State Department deputy spokeswoman Marie Harf said in a statement.

Bae's family welcomed Newman's release and said in a statement: "We believe that our Kenneth should also come home soon."

Dongguk University professor Kim Yong-Hyun, a North Korea expert in Seoul, said Pyongyang had freed Newman in a bid to facilitate dialogue with Washington. Biden said he had no direct role in securing his release.

"North Korea knows that the detention of a sick, old man will aggravate relations with the United States," Kim told AFP.

Last week Pyongyang for the first time officially admitted holding Newman, saying he was detained for "hostile acts" after entering the country "under the guise of a tourist".

North Korea had accused him of committing crimes both as a tourist and during his participation in the Korean War six decades ago.

The North also claimed that Newman masterminded espionage and subversive activities during the war and was involved in the killing of North Korean soldiers and innocent civilians.

Newman, a retired financial executive who spent time in North Korea during the war, had filmed a video apology confessing to his crimes.

The North released the footage and photos showing Newman -- dressed in a button-down blue shirt and light, wrinkled trousers -- reading the apology, which was dated November 9 and ran to nearly 600 words.

Pyongyang claimed Newman, who supervised a South Korean guerrilla unit during the war, had intended to meet surviving soldiers and pray for the souls of the dead during his trip to North Korea.

But friends and relatives have said the grandfather, who was on an organised tour, was detained due to a "misunderstanding".

South Korean veterans who served with Newman during the war have said North Korea fabricated charges against the American. They said Newman had tried to visit Seoul following a trip to Pyongyang.

The autocratic regime has in the past freed detained Americans after visits from high-level emissaries.

Pyongyang runs one of the world's most secretive states and independently verifying official reports is notoriously difficult.

The communist regime is widely thought to govern with an iron fist, with frequent public executions and up to 200,000 political prisoners languishing in labour camps.