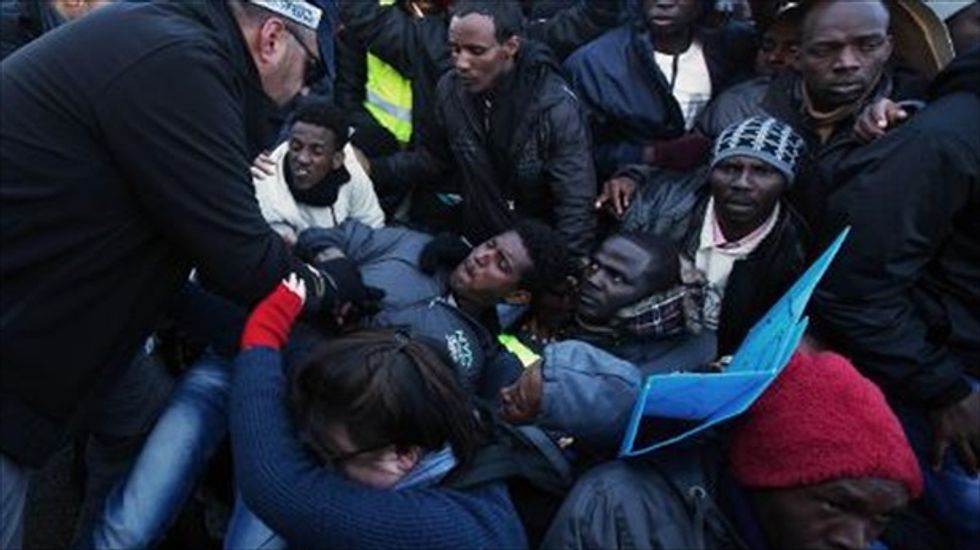 African immigrant protesters are arrested by Israeli immigration policemen near the Parliament in Jerusalem on Dec. 17, 2013 [AFP]

Nearly 200 African asylum seekers who entered Israel illegally demonstrated Tuesday in Jerusalem against being housed at a new open facility they walked out of two days earlier.

The men had left the Holot facility in southern Israel on Sunday night and made their way to the city on foot and by bus.

Holding banners reading "we are refugees not criminals" and "walk for freedom and humanity," they marched from the prime minister's office to the nearby parliament, accompanied by dozens of Israeli human rights activists.

The demonstrators, who would be allowed to work and have social benefits if they held refugee status, accused the government of "racism."

"Many people are suffering from the racism of the right(-wing) government of Israel," Walidin Sleiman, from Sudan, told AFP.

Sleiman added that if Israel did not want to give them rights then they should be allowed to go somewhere else.

Michal Roisin, a lawmaker from the left-wing Meretz party, said "as long as there is no place that can receive them -- they can't go back to their homelands -- we must ensure their rights."

Activist Moran Mekamel, of the "Students for Refugees" group, said each case should be examined to determine "whether they qualify as asylum seekers," adding that "the facility they've been kept in is nothing short of a prison."

Prime Minister Benjamin Netanyahu told parliament Tuesday that "the infiltrators who were transferred to the special facility can be in it, or return to their countries."

Police broke up the protest outside parliament, a spokesman said, noting that "some 180 people were transferred to buses awaiting them after an illegal protest."

An AFP correspondent said police used force to disperse the demonstrators, at least two of whom needed medical care.

The sprawling detention facility only began operating on Thursday, when 484 illegal immigrants from Africa were taken there, the Israel Prisons Service said.

It is open during the day but inmates must return for a night lockdown.

Under legislation passed on December 10, illegal immigrants entering Israel can be held for up to a year without trail.

It was the latest in a series of measures aimed at cracking down on close to 60,000 illegal immigrants from Africa, whom Israel says pose a threat to the state's Jewish character.

The construction of a high-tech fence along the border with Egypt was recently completed.

The new law amends earlier legislation which allowed for immigrants to be held for up to three years without trial, but which was overturned by the Supreme Court in September.

The Association for Civil Rights in Israel (ACRI) and other groups have already filed a petition against the new law.