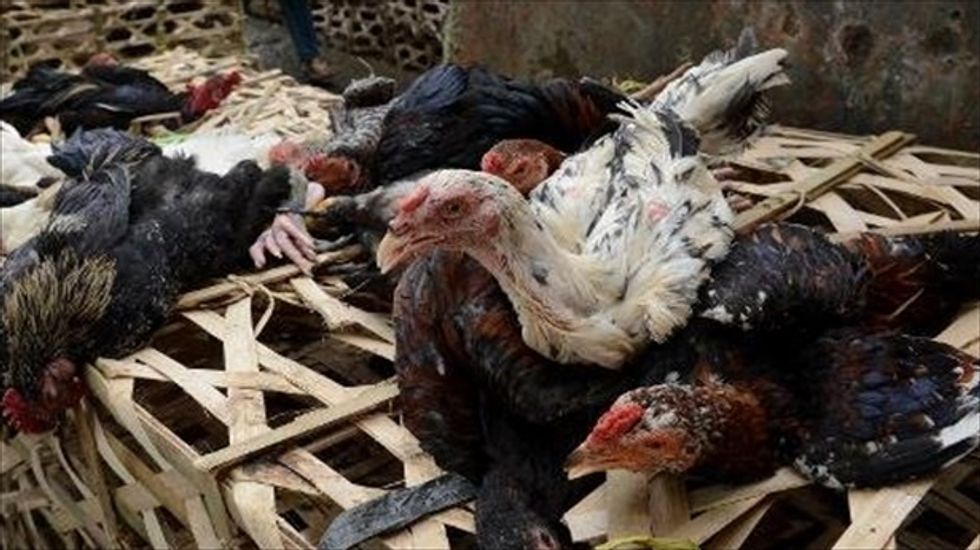 Vendors display live chicken at a market in Jakarta [AFP]

Almost all of the raw chicken sold in the US contains potentially harmful bacteria such as salmonella and E.coli, according to an analysis by Consumer Reports published Thursday.

The magazine tested 316 raw chicken breasts in 26 states and "found potentially harmful bacteria lurking in almost all of the chicken, including organic brands," it said.

The analysis found that chicken from the four largest brands (Perdue, Pilgrim's, Sanderson Farms, Tyson) "contained worrisome amounts of bacteria" and that more than half the chicken breasts were tainted with fecal contaminants that can cause blood and urinary-tract infections.

The magazine's study was already underway this fall when there was an outbreak of salmonella that government investigators linked to chicken sold by three Foster Farm plants. In that case, some 389 people were infected, the magazine said.

"What's going on with the nation's most popular meat?" queried the well-known consumer publication, pointing out that Americans buy an estimated 83 pounds of chicken a person each year.

The magazine said more than 48 million people fall sick each year due to food tainted with salmonella, campylobacter, E. coli, and other contaminants, and the US Centers for Disease Control and Prevention has found that "more deaths were attributed to poultry than to any other commodity."

Bacteria from contaminated chicken is also problematic because it can spread easily through "cross-contamination" in the kitchen if consumers touch other surfaces, the magazine said.

Recommendations for averting contamination include washing one's hands immediately after touching raw chicken and cooking the chicken to an internal temperature of at least 165 degrees Fahrenheit.

A statement by the National Chicken Council said the Consumer Reports analysis looked at a sample size of only .0004 percent of chicken sold on any given day.

"Americans eat about 160 million servings of chicken every single day, and 99.99 percent of those servings are consumed safely," the council said. "Unfortunately, this particular statistic was left out of the 'in depth' piece recently published by Consumer Reports."

While bacteria cannot be entirely eliminated, smart handling can ensure food safety, the council said. "All bacteria, antibiotic resistant or not, is killed by proper cooking," the council added.

Officials with the US Department of Agriculture did not immediately respond to a request for comment.