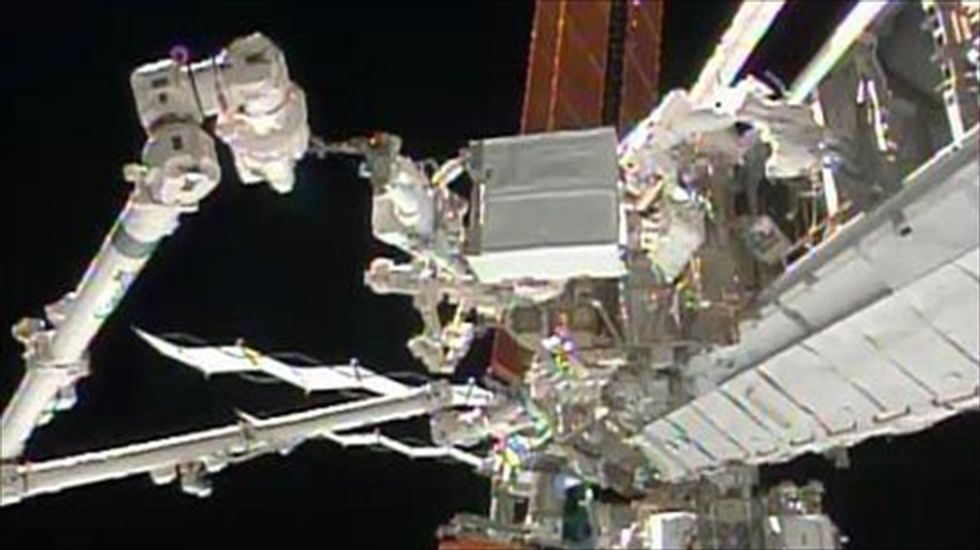 Two American astronauts prepared to step out Tuesday on a rare Christmas Eve spacewalk to wrap up repairs to the cooling system at the International Space Station, NASA said.

The spacewalk is set to begin at 7:10 am (1210 GMT), marking the second outing to replace an ammonia pump module whose internal control valve failed December 11.

"The two spacewalkers will retrieve a spare pump module from an external stowage platform and install it in the currently vacated slot to restore full cooling capability for the complex," NASA said.

NASA astronauts Rick Mastracchio, 53, and Mike Hopkins, 44, made swift work of their first spacewalk on Saturday, disconnecting and pulling out an old cooling pump which regulates the temperature of equipment at the orbiting space lab.

They managed to complete almost two days' worth of work in a single outing that lasted just five and a half hours, ending an hour earlier than planned.

However, a problem emerged with Mastracchio's spacesuit afterward, adding new concerns about the safety of the 35-year-old gear that astronauts wear to protect them.

NASA said "a small amount of water" entered the suit's cooling system after Mastracchio had re-entered the space station airlock at the end of the spacewalk.

"As a result, flight controllers decided to switch to a backup suit for Mastracchio for the next spacewalk."

The task of resizing a spare suit on board the ISS took an extra day, and postponed the spacewalk from its initially planned date of Monday to Tuesday.

NASA said the problem is not related to the water leak in a helmet that cut short Italian astronaut Luca Parmitano's spacewalk in July, and risked drowning him.

NASA is still investigating what went wrong in that case. As a backup measure, the astronauts are now outfitted with emergency snorkels in their spacesuits and extra pads to absorb any leaking water in their helmets.

Flight Engineer Koichi Wakata of the Japan Aerospace Exploration Agency will be operating the space station's 57-foot (15-meter) robotic arm, which will hoist Hopkins and the new pump module from its stowage platform to the place it must be installed.

"After the spacewalkers complete five electrical connections and four fluid connections, activation of the pump will restore full dual-loop cooling capability for the station," the space agency said.

Tuesday's spacewalk will be the second of Hopkins' career, and the eighth for Mastracchio.

NASA said the last time astronauts embarked on a Christmas Eve spacewalk was 14 years ago, when space shuttle Discovery astronauts Steve Smith and John Grunsfeld stepped out to install upgrades and new insulation on the Hubble Space Telescope.

"If the spacewalk goes as expected Tuesday, all of the pump replacement work should be completed with just two spacewalks," NASA said.

Next, Russian cosmonauts Oleg Kotov and Sergey Ryazanskiy will make a spacewalk on December 27 to install a pair of high-fidelity cameras on the Zvezda service module and to do maintenance on the Russian segment of the station.