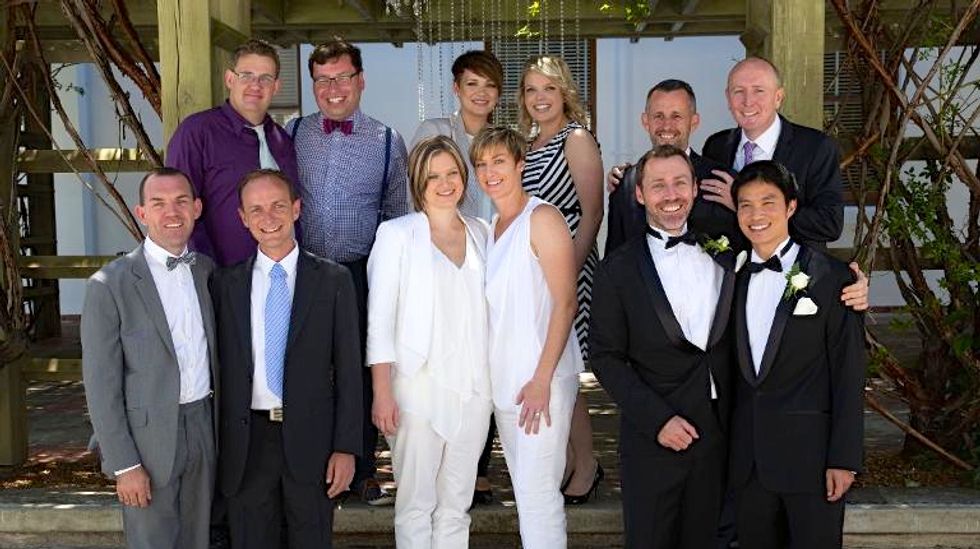 Australia's first gay marriages were celebrated Saturday in the national capital Canberra, despite the prospect of a High Court decision ruling against the unions later this week.

As soon as the clocked ticked past midnight, several couples tied the knot -- including Stephen Dawson, a Labor Party member of the Western Australian parliament, who married Dennis Liddelow on the lawns of the Federal Parliament.

"This is about us professing our love for each other... and at least for the moment our relationship will be legally recognised as a marriage," he told the Australian Broadcasting Corporation.

Another couple to marry at one minute past midnight, Alan Wright and Joel Player chose Canberra's National Carillon landmark on Lake Burley Griffin for their night marriage, saying they hoped it got the message out "that we are no different".

The Australian Capital Territory passed legislation in October which made it the only jurisdiction in the country to permit gay marriage, and couples arranged to wed there Saturday, the earliest opportunity to do so after a registration period.

The territory, home to the city of Canberra and the national parliament, pressed ahead with its legislation despite warnings it was inconsistent with federal laws which do not permit same-sex weddings.

Australia's Marriage Act defines marriage as between a man and a woman, so while same-sex civil unions are available in a majority of Australian states these couples are not formally recognised as married by the government.

The federal government is challenging the validity of the Australian Capital Territory legislation in the High Court and a ruling is due on December 12.

The ACT government has said it is confident its law is strong enough to prevail but has admitted the legal challenge could have implications for those couples who choose to wed in the small window of opportunity.

"Regardless of what happens in the High Court, the significance of this moment will remain and send a strong signal about what a contemporary 21st-century Australia should look like," ACT Attorney-General Simon Corbell said.

Ivan Hinton, who Saturday married his partner of 11 years Chris Teoh in the grounds of Old Parliament House, said the legislation meant that gay relationships were for the first time given the same respect as heterosexual ones.

"I understand that the High Court (challenge) is an issue and we will deal with that on Thursday but it can't overshadow that Chris and I woke up this morning knowing that our community respects us for who we are, has the same respect for our relationship and has the same hopes as we do for our future," he told AFP.

"What happens on Thursday and further on in the pursuit of marriage equality really comes second to that experience."

Gay marriage has recently been a high-profile political issue in Australia which hosts one of the world's largest annual gay and lesbian Mardi Gras celebrations in Sydney.

Federal parliament last year voted down laws allowing same-sex marriage when conservative members opposed the move as a block after leader Tony Abbott denied them a conscience vote on the sensitive issue.

The Australian Christian Lobby also spoke against gay marriages Saturday, warning they would have "big social consequences", particularly for the children of same-sex partners.

But Hinton, who had entered into a non-legally binding commitment ceremony in Australia five years ago with Teoh before they travelled to Canada to get married, said he believed that Australia will eventually approve gay marriage nationally.

"It's just a matter of time and political will," he said.