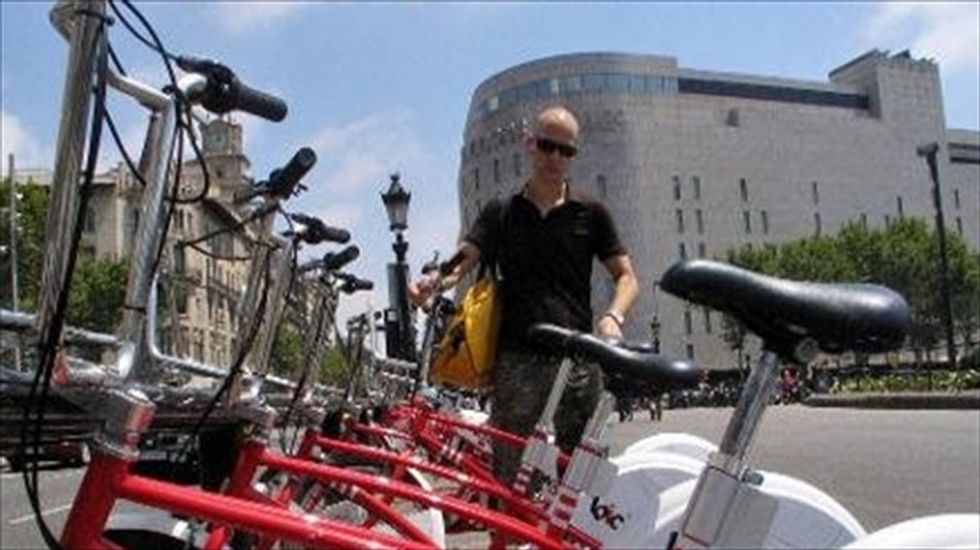 A man takes a 'Bicing' bike for a ride, a shared bicycle service on the Plaza Catalunya in Barcelona. [AFP]

Barcelona boasts the world's most successful bike share program, according to a report Thursday that lays out the secrets of getting more people out and about on two wheels.

The Spanish Mediterranean city's Bicing system averages 10.8 trips per bike and 67.9 trips per resident, said the Institute for Transportation and Development Policy (ITDP), a think tank in the US capital.

Hard on its heels, in alphabetical order, are the French city of Lyon, Mexico City, Montreal, New York, Paris and Rio de Janeiro.

Little known a decade ago, bike sharing has spread quickly around the world, with an estimated 400 to 600 communities -- from big metropolitan areas to small towns -- launching schemes, and more following suit.

"We aren't saying whether any of those (systems) are better than one another," said Colin Hughes, the ITDP's director for national policy and project evaluation.

"The main point is that these are systems that are exhibiting a really high impact on mobility in the cities they're in -- there's a high percentage of people using them -- and they are showing themselves to be pretty cost effective," Hughes told AFP.

"The public investment is really worthwhile there."

For its report, "The Bike Share Planning Guide," the ITDP crunched the numbers from bike share programs around the world to establish, for the first time, what it takes to have a winning rent-a-bike network.

Some points seem obvious, such as "comfortable, commuter-style bicycles" specially designed to discourage theft, as well as easy-to-use, fully automated locking systems at docking stations and attractive pricing to encourage maximum use.

But what's especially key, the report stated, is "a dense network of stations ... with an average spacing of 300 meters (yards)" between them.

Another essential element is the use of cellphone technology to keep track of the availability of bikes in real-time and sharing that data with users via the Internet, smartphones and computer screens at docking stations.

One lesson that some cities like Washington learned the hard way is to launch a scheme with too few bikes and too few places to dock them.

"What we tend to see is that the systems that are most successful don't start small," he said.

"When you open a system, that's the most valuable time you have. That's when it makes news. That's when you're exposing the public to your system -- and what you really want is for people's first experience to be a really positive one."

There also have to be some bicycle lanes already in place, although Hughes noted that the popularity of a bike share system tends to encourage the expansion of a community's two-wheeler infrastructure.

Going forward, Hughes anticipated continued growth of bike sharing around the world as cities embrace the concept as a 21st century way of presenting themselves as hip places to live, work and invest.

"It's a cue, a way of saying, 'This is a city that values quality of life' ... That's also why you see some big companies lining up to sponsor these systems, because bike share has a positive image," he said.

"If you want to be considered a global city, a city that's on the cutting edge, then bike share is going to be a key way of demonstrating that."

The report is available online at go.itdp.org.