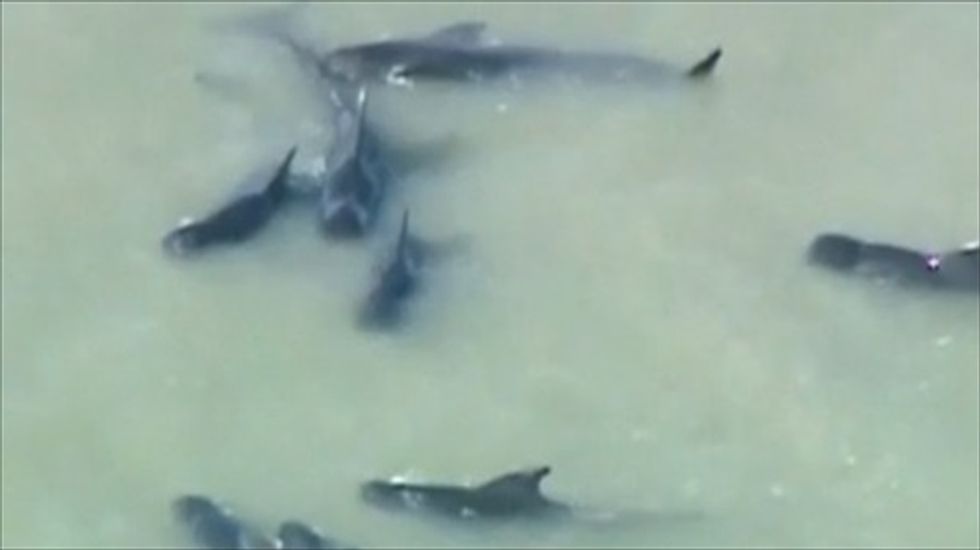 The fate of some 40 whales stranded in a remote region off Florida's Everglades National Park was unclear Friday, with officials saying they had lost track of more than half.

Twenty-four of the mammals were unaccounted for, Blair Mase of the National Oceanic and Atmospheric Administration told reporters, calling the development "encouraging."

We are "hoping they are out to sea," she said in a conference call.

But, she added, that was not "certain."

Eleven of the pilot whales have died since the mysterious mass stranding was first reported Tuesday, with rescuers racing against time to save the rest.

Of those that perished, four had to be euthanized. Others are unaccounted for amid fears they died and sunk to the bottom of the ocean floor.

Seven whales in shallow waters were being monitored Friday, with plans in place to assess their health, Mase said.

On Thursday, a rescue team of experts from several agencies, including the National Park Service and the US Coast Guard, grew from 25 to 35 scientists and stranding specialists who can only reach the whales by boat.

But with the clock ticking, NOAA stressed that the rescuers were treading cautiously as sharks have been seen feeding on the dead whales' carcasses.

It was still unclear why the whales swam to the warm, shallow waters less than three feet (0.9 meters) deep.

Some experts and animal welfare organizations speculated that possible disorientation after a maritime explosion or a disorder caused by environmental pollution that leads to suicide may have played a role.

"The possible causes of this situation are still unknown for us. Marine biologists said that it's hard to know why they behave like that," said Mary Plumb, a spokeswoman for the Everglades National Park, told AFP late Thursday.

Pilot whales are very cohesive among themselves, and usually travel in big family groups.

Rescuers began their efforts Tuesday after park rangers were told that four whales were stranded. When teams arrived at the scene they discovered a much larger number.

The efforts were complicated by the fact that the beaching occurred in a remote part of southern Florida.

The mass beaching is not a first. Last year, roughly 20 pilot whales were stranded in the Florida Keys while last September just five survived after they, too, lost their way.

Everglades National Park provides a unique habitat for a range of species, including crocodiles.

Watch a report on the whales' erratic movements, aired on CBS News on Thursday, below.