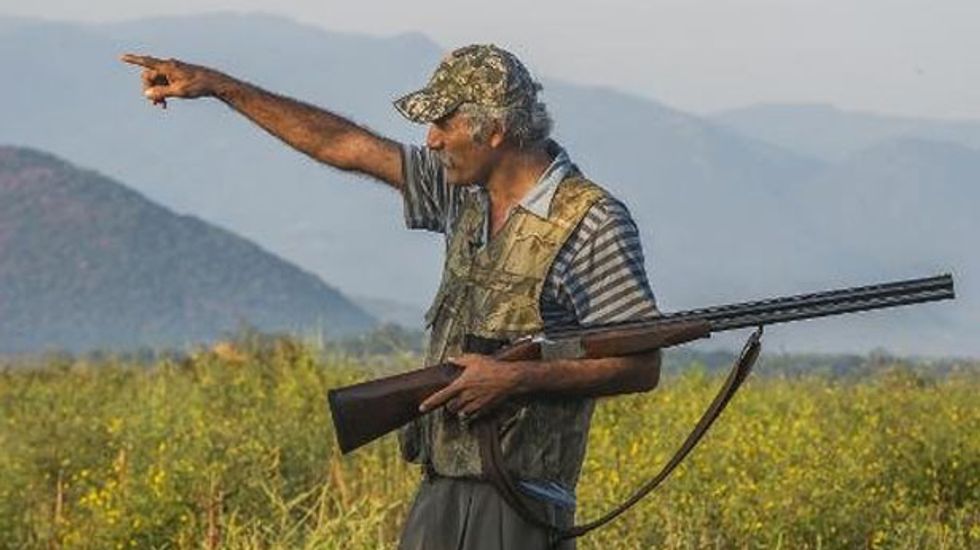 Bells tolled from the red cathedral tower in the western Mexico town of Apatzingan, calling the faithful to hear a bishop who backs a growing vigilante movement against a cult-like drug cartel.

As people headed to church, soldiers patrolled the main square, banks and a supermarket in this bastion of the fearsome Knights Templar gang, which has brought mayhem to the southwestern state of Michoacan.

"We cannot deny that we are living through difficult times. Our towns are experiencing an atmosphere of uncertainty and suspicion," Bishop Miguel Patino Velazquez told his flock, reading a message signed by Michoacan's bishops.

On the western outskirts, the farmers who formed self-defense militia to combat the Templars earlier this year man their own checkpoints behind walls of sandbags.

The vigilantes say they have "liberated" more towns near Apatzingan in recent weeks and vow to spread, ignoring federal government warnings that their expansion will not be tolerated.

"Where there are kidnappings and executions, we will take all of them," said Jose Manuel Mireles, a tall 55-year-old doctor with a thick mustache who led one of the first revolts in Tepalcatepec on February 24.

"If (authorities) say they won't allow us to advance but they do nothing, then they can't stop us. Our people are ready to die, including against the state government if necessary, because they are infested with criminals," Mireles said as he hunted doves in a remote ranch.

The vigilantes appeared in a handful of towns on February 24, fed up with the municipal police's inability or unwillingness to stop the Templars, who have killed, kidnapped, fixed lime prices and extorted everyone from butchers to tortilla makers.

Underscoring the complexity of Michoacan, officials and the Templars have accused the self-defense forces of being proxies of the Jalisco New Generation cartel, a charge they deny.

President Enrique Pena Nieto, whose promise to curb violence in Mexico is challenged by Michoacan's troubles, deployed thousands of soldiers to the state in May to tame the situation.

Troops and federal police patrol sunbaked roads and towns in Tierra Caliente, or Hot Country, an agricultural region that exports limes and avocados to the United States as well as methamphetamine produced in makeshift labs.

Last week, unidentified gunmen hiding in the woods fired on four busloads of federal police on a road near Apatzingan, killing two and wounding nine officers.

The chaos prompted Bishop Patino to send a missive in October accusing local officials of colluding with criminals, warning that Michoacan had "all the characteristics of a failed state."

Last month, authorities hid the 75-year-old prelate in another town over an unspecified threat against him.

But Patino, who is retiring, returned to preach in Apatzingan, using his pulpit to give support to the vigilantes.

"If I want to attack you, you have the obligation to defend yourself, no? It's the same with society," the diminutive clergyman with dark circles under his eyes told AFP after Sunday service, smiling to men, women and children who lined up to shake his hand.

But the Templars, whose symbol is the red cross of the medieval Catholic crusaders and claim to be pious defenders of Michoacan, enjoy some support in Apatzingan.

"They're the ones who bring in the money for the town to function," said Antonio, 19, a watch salesman in a street stand outside the cathedral who declined to give his last name.

But some residents said they no longer venture out at night and stores close early out of fear.

"People are fleeing town. You don't know who's good or bad anymore," said Eusebia Lopez Barbosa, 51, who prayed in the back of the cathedral. "The bishop simply tells the truth."

The vigilantes say they are now in 19 towns and are eyeing other communities, including Apatzingan, which lies on a key transport route they can no longer use for their fruits.

Hundreds of vigilantes tried to oust the Templars from Apatzingan in October, but the army barred them from entering with weapons and they were met with gunfire in the main square.

"I admit that we are outside the law. But we had to do this," said Hipolito Mora, a bespectacled 58-year-old lime grower and vigilante leader in La Ruana, where his men drive cars emblazoned with the words "citizen self-defense."

Few had weapons when AFP reporters visited the region though one was spotted with an AR-15 assault rifle and their leaders carried handguns in their belts.

But they deny getting their weapons and bulletproof vests from the Jalisco cartel, saying they took them from fleeing Templars. One vigilante said they rejected an offer from suspected Jalisco cartel members.

The self-defense units have critics within Michoacan.

A group of 400 businessmen formed the Michoacan Peace and Dignity Association, organizing protests against the vigilantes and the state's militarization.

But some were accused by a senator of being Templar emissaries when they visited the Senate in Mexico City in October, a charge they denied.

"We are speaking out against all armed groups that are in Michoacan," said association president Tito Fernandez. "We see the (vigilantes) as an armed civilian group that is violating the rule of law."