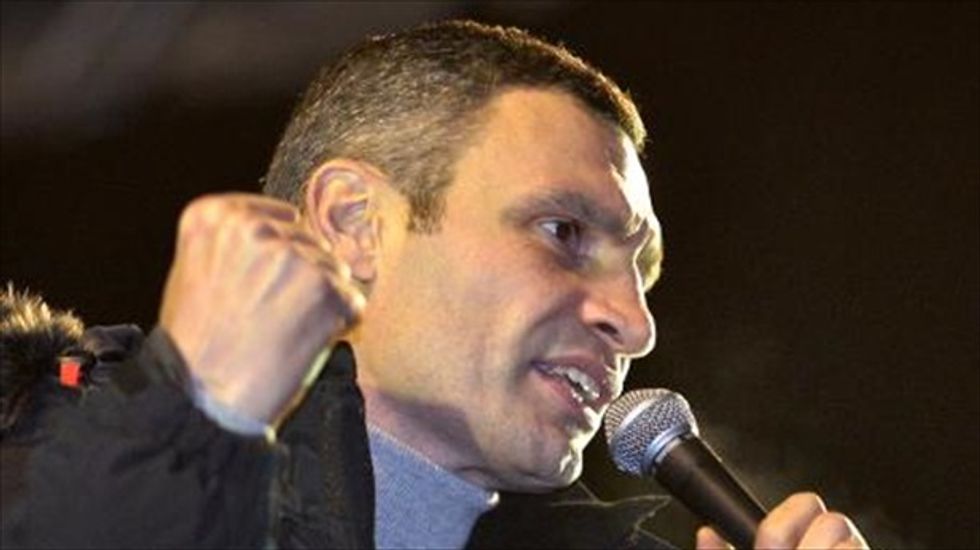 Ukrainian opposition leader Vitali Klitschko announced on Monday he was relinquishing his WBC world heavyweight title so he can focus on his political career in Ukraine.

The 42-year-old -- whose younger brother Wladimir is the WBA, IBF, WBO and IBO heavyweight champion -- thanked the WBC for leaving open the opportunity for him to return to the ring by making him WBC Champion Emeritus.

However, he all but ruled out that option as he intends to play a leading role in seeing present Ukraine president Viktor Yanukovych ousted in next year's presidential election.

"I want to thank the WBC and its president Don Jose Sulaiman for the support in our fight for democracy and freedom in the Ukraine," Klitschko said in a statement on Fight News.com.

"It was and is a great honor to hold the WBC title and I've always done it with pride.

"The offer of the WBC gives me the theoretical possibility to return to the boxing ring which I cannot imagine at all to the current state.

"Right now, my full concentration is on politics in Ukraine, and I feel that the people need me there. My brother Wladimir will ensure more sporting success and I will – as always – support him as much as he currently supports me in my political fight."

The WBC also issued a statement saying that by appointing him Emeritus Champion they were leaving the way open for him to return should he wish to.

"The Board Meeting of the WBC and its president Jose Sulaiman have decided to appoint Vitali Klitschko (44-2, 40 KOs) as Champion Emeritus," read the statement.

"The WBC gave its full support to Vitali Klitschko in his political activities in his home country Ukraine and understands that he is unable to defend his title inside the ring in the foreseeable future.

"Therefore the WBC appointed Klitschko Champion Emeritus and thus gives him the opportunity to decide at a later point whether he wants to resign from professional boxing or fight for the WBC heavyweight title again."

Having last lost more than a decade ago to Britain's Lennox Lewis, "Dr Ironfist" has earned knock-outs in 41 of his 45 victories during 47 professional fights with just two defeats.

Vitali is a three-time heavyweight world champion and last fought in September 2012 when he beat Germany's Manuel Charr.

However, his political career has become more of a priority in recent times and in October he announced a bid to be elected president next year.

But his soaring political ambitions were dealt an immediate blow by the adoption of a legal amendment barring people who spend much of their time living or working abroad from running for president.

Klitschko boxes and has residency status in Germany.

But he still insists that the authorities have no reason to deny him participation in the polls, accusing Yanukovych of trying to remove his main rivals from politics.

"He has put one of his opponent in prison and the other he wants to remove (from the polls)," Klitschko said in November in reference to himself and his jailed ally Yulia Tymoshenko, a former prime minister and fierce Yanukovych foe.

President Yanukovych's decision to scrap key agreements with the EU in November and police violence against protesters sparked the largest demonstrations in the ex-Soviet country since the 2004 pro-democracy Orange Revolution.