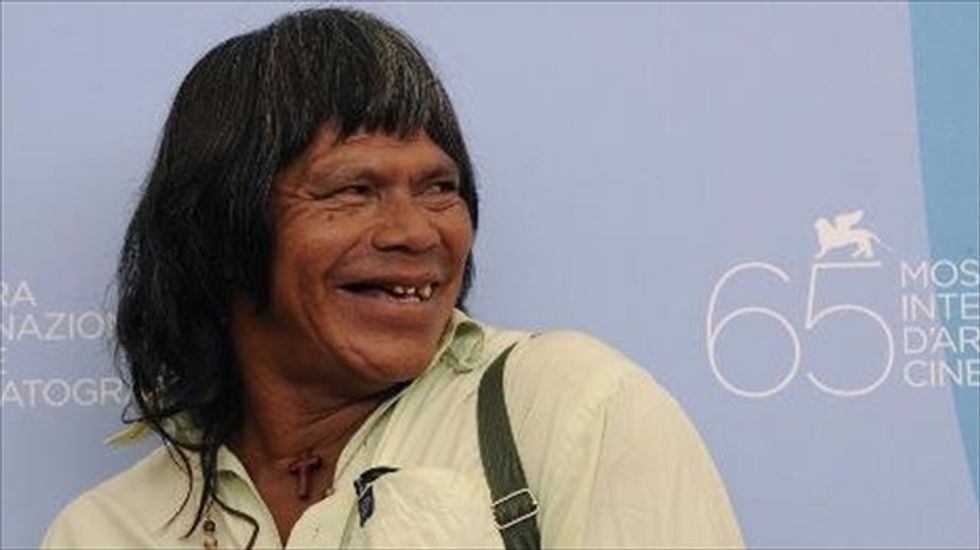 Ambrosio Vilhalva smiles during the photocall of the movie 'Birdwatchers' directed by Italian Marco Bechis during the 65th Venice International Film Festival at Venice Lido, on Sept. 1, 2008 [AFP]

The father-in-law of murdered Guarani tribal elder Ambrosio Vilhalva has been arrested in the Brazilian state of Mato Grosso do Sul, suspected of the killing, police said Wednesday.

Vilhalva, who for decades fought for his people's right to live on their ancestral lands, was stabbed to death Sunday at the entrance of his community of Guyra Roka in Mato Grosso do Sul.

"We arrested the father-in-law of Mr. Vilhalva, Ricardo Mendes Quevedo," Benjamin Lax, the police chief in the town of Caarapo, told AFP.

"According to the investigation, it was a family dispute during which two men drank liquor. Vilhalva's two women turned him in but he denies it," he added.

Vilhalva, 54, lived with his 47-year-old wife and her 23-year-old daughter with whom he has three children, Lax said.

Quevedo, 54, was detained and a local judge has 24 hours to decide whether the suspect will be free pending his trial, the police chief said.

Egon Heck, one of the spokesmen for the Catholic Church-linked Indian Missionary Council, said the killing, even though it resulted from a family dispute rather than a land feud, illustrated the "tense atmosphere in which the Guarani live."

"The fact that they lack space and are confined to a few hectares of land aggravates problems of alcoholism, malnutrition and high suicide rates," he told the local press.

Tuesday, the London-based group Survival International, which champions the rights of indigenous people worldwide, noted that Vilhalva had starred as the main character in the award-winning film "Birdwatchers," which portrays the Guarani tribe's desperate struggle for their land.

Guarani Indians, whose total population in Brazil is estimated at 46,000, have been trying to recover a small portion of their original territories, but face violent resistance from wealthy ranchers as well as soy and sugar-cane plantation owners.