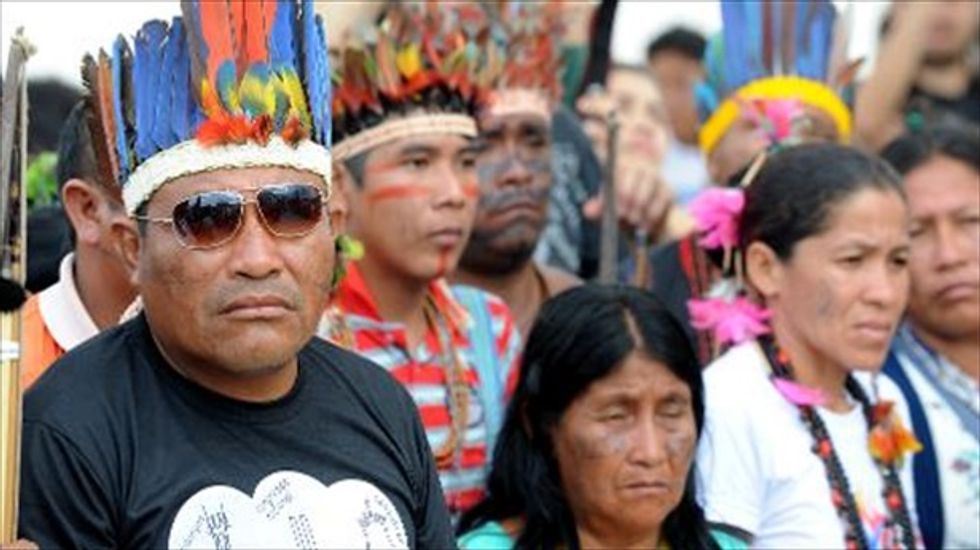 Brazilian natives and students take part in a demonstration in support of the Guarani-Kaiowa tribe to urge authorities to demarcate the tribe's ancestral lands, in Brasilia, Nov. 9, 2012 [AFP]

Brazil's Guarani Indians accused Coca-Cola of buying sugar from a Bermudan company that sourced it from their ancestral lands, urging the US soft drink giant to find a new supplier, a tribal rights group said Monday.

The Guarani community, with a total population in Brazil estimated at 46,000, has been trying to recover a small portion of its original territories, but faces violent resistance from wealthy ranchers as well as soy and sugar-cane plantation owners.

"While these companies profit, we are forced to endure hunger, misery, and killings," said a Guarani spokesman in a statement by London-based Survival International, which champions the rights of indigenous people worldwide.

Coca-Cola "must stop buying sugar from Bunge," it said.

But in a statement sent to AFP from its US headquarters in White Plains, New York, Bunge said it "operates its sugar and bioenergy business in accordance with all Brazilian laws, (and) with Bunge's global labor, environmental and sustainability policies."

According to Survival International, the Jata Yvary community in Mato Grosso do Sul state, which has 370 residents, "has lost most of its ancestral land to plantations which sell sugar cane to Bunge, and is forced to live on a small patch of land completely surrounded by the crop."

However, Bunge maintained that "the lands in question are still under adjudication by the Brazilian government... As of now, the Federal Government has not made a decision designating the lands as indigenous."

"As such, the company continues to honor legal contracts with growers, signed prior to our acquisition of the mill, to source sugarcane from these lands," it added.

Bunge pledged not to renew the contracts as they expire. The last are set to run out in 2014.

"If the lands are designated as indigenous before that time, we will stop purchases," Bunge spokeswoman Susan Burns added.

Survival International insists Guarani Indians suffer "severe health problems as a result of toxic pesticides sprayed on the plantations, and mourn the loss of their forest, which they relied on for food, medicines and shelter."