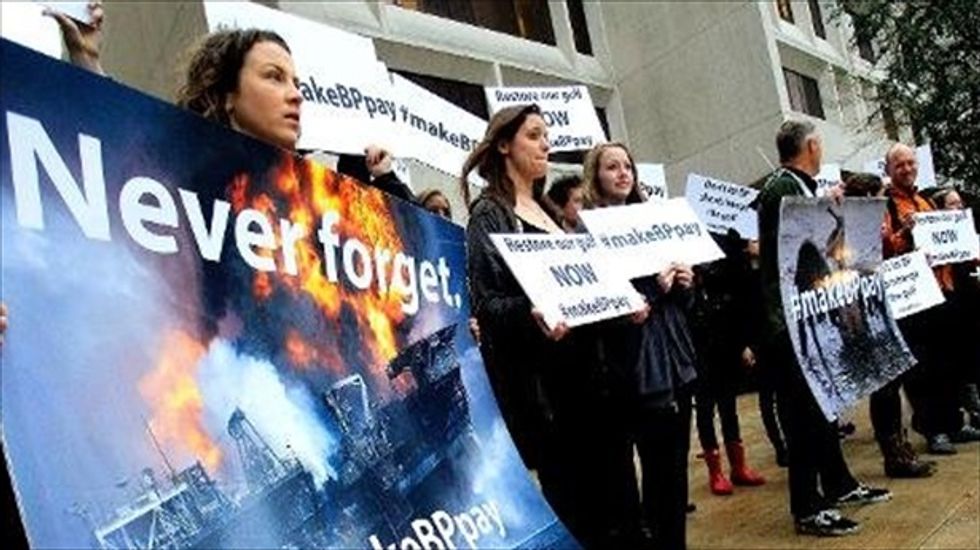 Activists hold signs in front of the Hale Boggs Federal Building on the first day of the trial over the Deep Water Horizon oil rig spill on Feb. 25, 2013 in New Orleans, Louisiana [AFP]

Britain has formally backed BP's effort to overturn a US ban on the oil giant from government contracts due to the disastrous 2010 Gulf of Mexico oil spill.

In a filing Monday to a US court in Texas, the British government suggested the law may not have been applied fairly to BP.

It also warned that the US Environmental Protection Agency (EPA) ban on the company creates "harmful regulatory uncertainty" that might discourage other companies from cooperating with regulators.

"Regulators should apply the law fairly and predictably lest their actions erode global public trust in the institutions and individuals involved. In this case, Her Majesty's Government is concerned that these reasonable standards have not been met," it said in the filing.

In addition, the government said, the EPA ban "risks creating a powerful disincentive to cooperation in times of crisis."

"Corporations may think twice before agreeing to accept responsibility, to perform remedial work, or to negotiate a plea agreement if such efforts are not taken into account when the time comes to mete out other sanctions."

BP has paid billions of dollars in fines and compensation over the 2010 Deepwater Horizon disaster, which left 11 people dead and sent millions of barrels of oil churning into the Gulf of Mexico.

In November 2012 the company agreed with the Department of Justice to a then-record $4.5 billion fine and pleaded guilty to 14 counts to settle criminal charges in the case.

It has also spent more than $14 billion on the response and cleanup and paid another $10 billion to businesses, individuals and local governments that did not join the class-action lawsuit.

The EPA, in November 2012, blocked BP from federal contracts, citing its "lack of business integrity" in the Gulf disaster and its aftermath.

"Suspensions are a standard practice when a responsibility question is raised by action in a criminal case," EPA said.

In August 2013, BP sought to overturn the ban, arguing the company had already been punished for the spill and that the EPA's action was "punitive, arbitrary, capricious, and an abuse of EPA's discretion."

In its court filing, the British government also suggested that the ban was too heavy a penalty that has an economic impact both in Britain and the United States.

London said its appeal to the court comes with "a hope of safeguarding the broader economic and business environments from potentially adverse effects."

BP is also facing a civil trial under way in Louisiana that could result in billions of dollars more in environmental fines, if the Justice Department proves that gross negligence led to the accident.