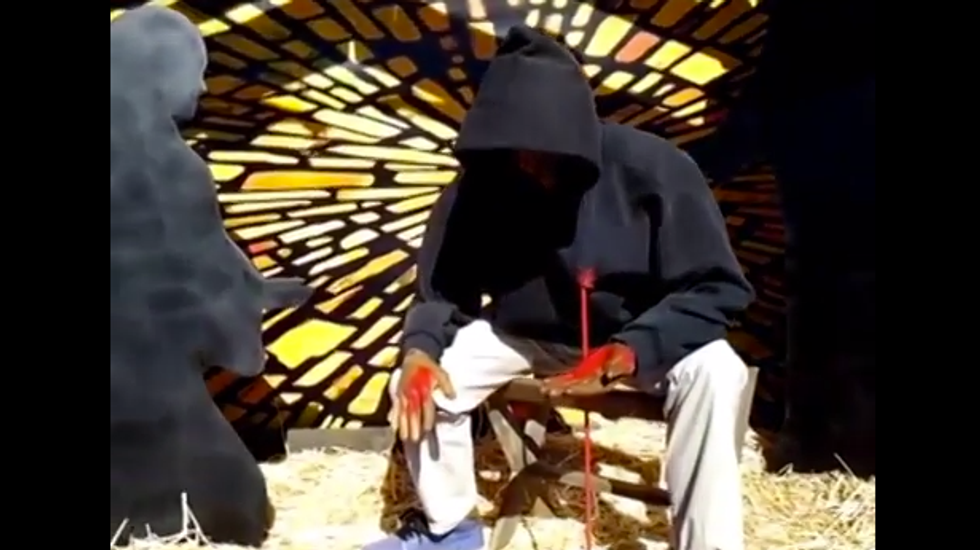 A southern California church known for its edgy Christmas displays depicted a mortally wounded Trayvon Martin this year in its Nativity scene as a comment on violence.

Artist John Zachary said the acquittal in July of George Zimmerman, who shot and killed the unarmed 17-year-old nearly two years ago in Florida, seemed to be a topic worthy of further discussion.

So he depicted the teen wearing a hooded sweatshirt, with blood pouring from his chest onto the straw-covered floor of the display set up at Claremont United Methodist Church near more traditional elements, such as the holy family and the three wise men.

Zachary said that commenting on Martin’s slaying fit into the Christmas backstory – King Herod’s order to slaughter all infants in Bethlehem in an attempt to kill the Messiah.

The artist said that, as Mary, Joseph and others celebrated the birth of Jesus, “other parents (are) in agony because their children had just been killed.”

Zachary, who works as a Hollywood production designer, said a photo of Martin lying dead on the pavement emotionally affected him.

“What if Jesus was lying there bleeding to death? I was kind of thinking of that,” Zachary said.

He said the scene, which he titled, “A Child is Born, a Son is Given,” consciously blends the Christmas and Easter stories.

“Easter and Christmas should be tied together. It’s all the same story,” Zachary said.

Church members asked Zachary to help set up a Nativity scene in 2007, and the artist said he decided not to show a typical scene that reflected privilege.

“There’s a lot of people who don’t have that privilege,” Zachary said. “Maybe I should do something that’s provocative, that’s more in keeping with the teachings of Jesus.”

That first year, he depicted the holy family as homeless on a ghetto street, and community members offered notes of support and spontaneously filled a grocery cart in the scene with groceries that were donated to a food bank.

Since then, he’s depicted them as Iraqi refugees, Mexican migrants, an imprisoned black woman -- without Joseph -- and infant, and as three couples, including two same-sex couples, holding hands.

The same-sex couples were knocked over by vandals, which was investigated as a possible hate crime, but Zachary didn't suspect a political motivation.

The artist and church aim each year to show that Joseph, Mary and their son were outsiders.

“I think the value of this is that it stretches us to think, what does the birth of Christ call us to do?” said Sharon Rhodes-Wickett, the church’s lead pastor.

But she admits that Zachary’s work this year was disturbing.

“I found this year’s hard to look at,” the pastor said. “It’s hard to look at a young man who’s shot and bleeding to death. But even though I’m uncomfortable with it, that’s the point. We have to take a look at the violence.”

Zachary said response to the scene, which went up Dec. 8 and will come down Jan. 5, has been muted.

“I thought this would be more controversial, but I come to find out people don’t really like people getting shot,” Zachary said. “They may not agree what to do about it, but they agree it’s a bad thing.”

Watch this interview with the artist posted online by David Allen: