Can you make sense of a bizarre "War on Christmas" ad airing on MSNBC? 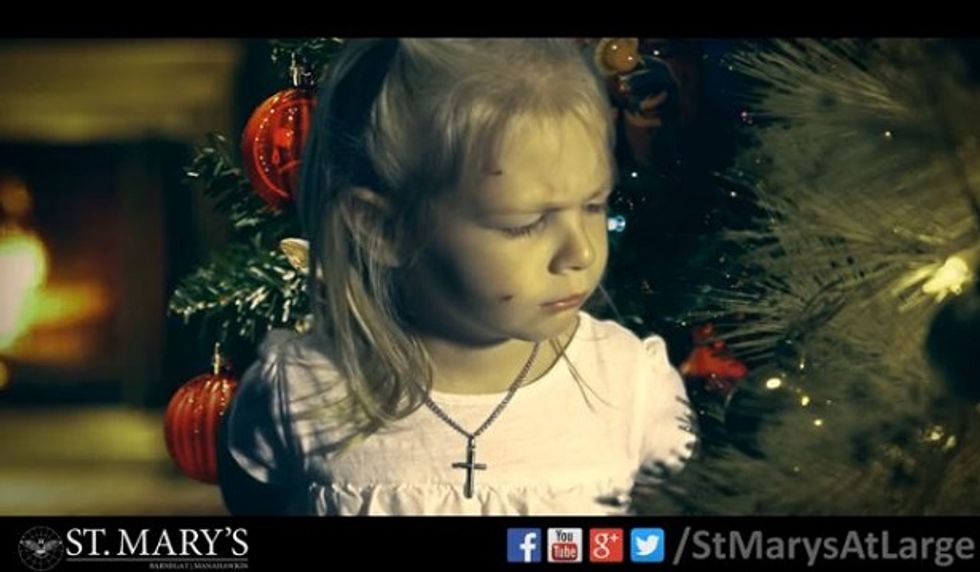 A commercial which has been airing on MSNBC may be the most bizarre salvo in the "War on Christmas" yet.

The ad opens with a smiling little girl, named by an unseen narrator as "Amy."

The narrator, listed as Jim Flood in the video's credits, then says, "We are one nation under God. No man owns Amy's happiness, and no man will define how she shows it," before the ad ends with the ear-piercing sound of a child screaming -- even though Amy can be seen laughing -- and something breaking. The narrator also does not explain what appear to be cuts on the child's face. At the end of the ad, some symbols appear, depicting the American flag, a crucifix, a heart and a smiley face, each connected with equals signs, and the words "LOVE TO ALL. PERIOD."

The YouTube page for the ad lists the creators as "St. Mary's At Large," and "Msgr. Kennard J. Tuzeneu" as the executive producer. The Raw Story e-mailed the organization, which is linked to St. Mary's Parish in Barnegat, New Jersey, and we're still waiting for a response.

The YouTube page also claims that the ad has been airing since November 25 on Fox News and MSNBC in the New York/New Jersey region, and indicates that it was created for the church by Kundrat Productions, owned by Lee Kundrat, a New Jersey heavy metal musician who goes by the name "Rat Skates."

Here's the ad itself. If you can figure out what it's getting at, please let us know in the comments.

For a few years, according to his YouTube channel, Rat Skates has been making odd short videos for conservative causes. Last year, he wrote and directed a short video featuring teens puzzling over the policies of President Barack Obama. Skates described the video as "the boldness of Bill O’Reilly meets the encouragement of Joel Osteen in this street-level documentary and study guide."

We've noticed an increasing number of outlandish ads made for local TV from small production houses. Earlier this week we wrote about an outrageous TV ad made for an Alabama law firm. Another production team, Rhett & Link of Los Angeles, has been getting a lot of notice for the odd ads it makes for small clients, like a weird and compelling spot for a chiropractor.