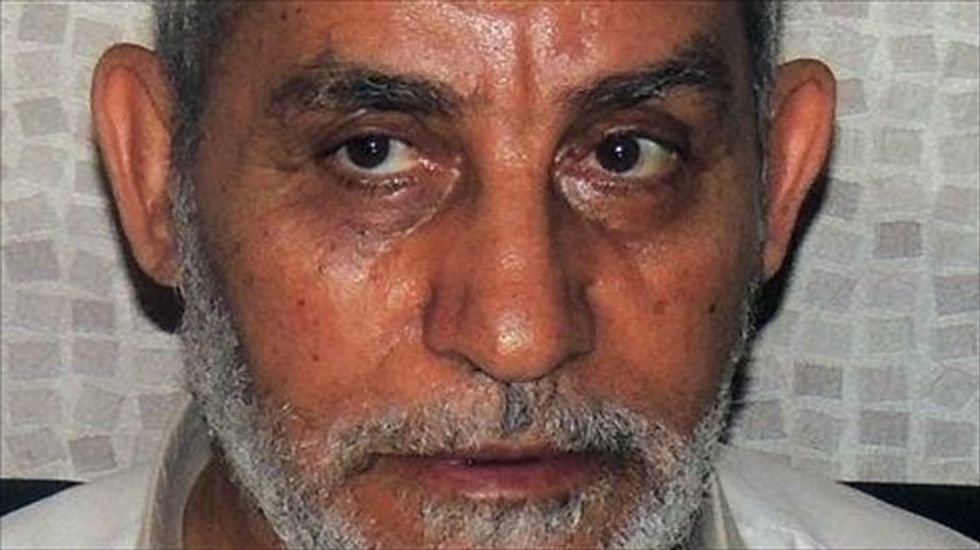 A picture distributed by the Egyptian interior ministry shows Mohamed Badie, chief of the Muslim Brotherhood, following his arrest on Aug. 20, 2013 in Cairo [AFP]

The trial of Egypt's Muslim Brotherhood chief and his deputies on charges related to protest deaths came to an abrupt end Wednesday when the judges quit in protest at chaos in the dock.

The previous session on October 29 of the trial of Mohamed Badie and 34 co-defendants had also been halted when the three presiding judges withdrew, citing "reasons of conscience".

On Wednesday, a new panel of three judges appointed to hear the case recused themselves after the accused Brotherhood members yelled slogans from the dock against the military-installed authorities.

Despite being ordered to keep quiet by the chief judge, the Brotherhood members continued to rail loudly against the government, which has relentlessly repressed their movement since the ouster of Islamist president Mohamed Morsi in July.

Badie and his two deputies, Khairat al-Shater and Rashad al-Bayoumi, face charges of inciting the murders of nine protesters who stormed the Brotherhood's Cairo headquarters on June 30.

If found guilty, they could face the death penalty.

Three other accused Islamists also face murder charges while 29 are charged with participating in acts of violence.

Millions of protesters on June 30 called for the ouster of Morsi, accusing him of working for the sole benefit of the Brotherhood, ruining an already dilapidated economy and monopolising power following the 2011 overthrow of long-time ruler Hosni Mubarak.

Morsi, Egypt's first democratically elected president, was deposed by the army on July 3 after just one year in office.

During Wednesday’s session, presiding judge Mostafa Salama initially suspended proceedings as Badie and his co-defendants hurled verbal abuse at the government installed by the military in the wake of Morsi's ouster.

But at the resumption, mayhem again erupted in the dock, with the accused jeering and yelling insults at the judges as well as against the government and military chief Abdel Fattah al-Sisi, the new strongman of Egyptian politics.

"Sisi traitor, Sisi traitor," they screamed as the judge tried in vain to restore order. Sisi had been appointed defence minister by Morsi when he became president.

Barely audible above the din, the judge then adjourned the trial.

"I asked the accused to remain calm but they did not do so. Therefore we are recusing ourselves," Salama said before he and his two fellow judges walked out.

In a brief but fiery address from the dock, Badie, dressed in white prison uniform like his fellow-accused, railed against the new authorities, accusing them of carrying out a "coup d'etat" by deposing Morsi.

"The Egyptian people tasted freedom after the revolution (which toppled longtime leader Hosni Mubarak in 2011) and since the election of Mohamed Morsi," he yelled, in his first public comments since his arrest. "They will not give up this freedom."

He was referring to a crackdown by police on August 14 when they stormed two protest camps set up by Morsi's supporters in Cairo, leaving hundreds dead.

During Wednesday's court session, Brotherhood supporters continuously flashed the four-finger sign that has become associated with the crackdown, while chanting, "Down with the military regime!" and "Mubarak's regime of secret police is back!"

Thousands of Islamists have been arrested in the crackdown, which has deeply polarised Egypt.

Badie meanwhile is also on trial in a separate case, which began on Monday.