Stephen Colbert to God: If atheists are created in your image, 'then you are a jerk' 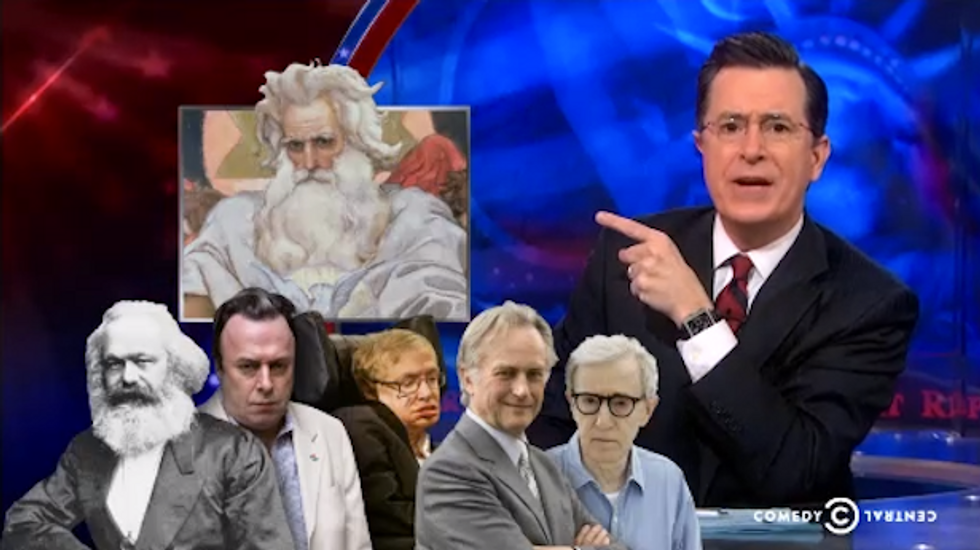 Stephen Colbert tackled the latest fronts opened up this season in the “war on Christmas,” including a Festivus pole set up next to a Christian display at the Florida state capitol.

“I’ve got an incoming news flash: I believe in God,” Colbert said Wednesday night. “And frankly, I have had it up to here with atheists. They’re so smug and annoying, and if they’re created in your image, then you are a jerk.”

He said in the opening segment of his Colbert Report program that atheists were always attacking Christians’ sacred holidays.

“I mean, baby Jesus is in so much danger this year that to protect his identity we had to call his birthday Xmas,” Colbert said.

He called the attacks “the blitzkrieg on Grinchitude.”

“Folks, the secular progressives are coming after our Christmas displays,” he said. “I can’t even put up a reindeer without some guy telling me to get off the roof of Temple Beth Elohim.”

Colbert played a clip from a Fox News program that aired Tuesday, when host Gretchen Carlson ranted that she was outraged by the Festivus pole made from beer cans and inspired by a fictional holiday depicted on the television show Seinfeld.

“I am so outraged by this,” Carlson said on the show. “Why do I have to drive around with my kids to look for a nativity scenes and be, like, ‘Oh, yeah, kids, look, there’s baby Jesus behind the Festivus pole made out of beer cans! It’s nuts!”

He said the situation had so outraged him that he was driven to research other traditions that Christians had absorbed into their seasonal celebration, such as gift-giving adopted from the Roman Saturnalia celebration or Christmas trees that were taken from the ancient Egyptian custom of worshiping the god Ra with palm fronds.

“Santa is based on the Visigoth warlord, Kringle the Un-jolly, who laid waste to his enemies with coal fire,” Colbert said. “His cheeks were like roses, his nose like a cherry, and from the blood of the vanquished whose bodies he buried.”