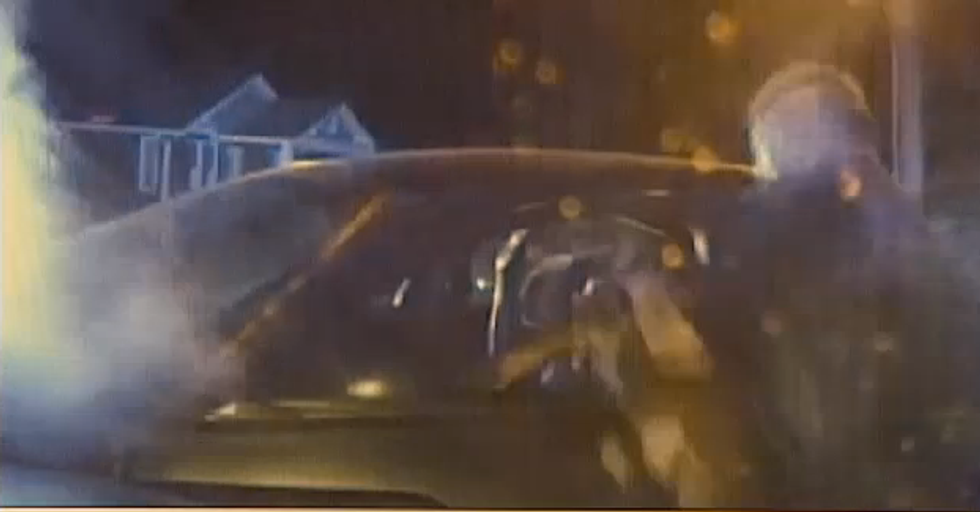 A grand jury declined to indict a North Carolina police officer this week despite viewing dashboard camera video that clearly shows him shoving a police dog inside a suspect’s vehicle as he holds his hands up in surrender.

The police dog then attacks the suspect, Johnnie Williams, as he’s trapped inside his car.

Williams, who suffered facial lacerations, said he never had a chance to surrender after leading Wilmington police on a pursuit Oct. 31 after driving through a drunken driving checkpoint.

Dash cam video shows Williams ram a police cruiser and running stop signs as he led officers on a chase through the city.

The chase finally ended when officers forced Williams to crash, and K-9 Officer Stafford Brister pinned him inside his vehicle by crashing into the driver’s side door.

Brister then gets out of his own vehicle and lifts his police dog into the suspect’s car while other officers stand by with their guns drawn on the passenger side of the vehicle.

Video shows the police dog biting Williams, who was hospitalized for injuries that required stitches.

District Attorney Ben David presented the case before a grand jury of 15 people, but they declined Monday to indict Brister on the charge of assault inflicting serious injury.

“I believed it was a close enough legal question that the community should decide whether the use of force was reasonable, and I would not rule as a matter of law that it was," David said.

Williams was indicted Monday on charges of assault with a deadly weapon on a government official, being a habitual felon and traffic violations.

Brister remains on administrative leave with pay while an internal investigation continues.

Chief Ralph Evangelous would not comment on specifics of the case or the video that was released Monday as part of the investigation, but he indicated that police work was challenging.

"Sometimes the job we do is not pretty,” Evangelous said.

Brister's attorney said he worried the video did not show the full circumstances that led up to the moment when the officer shoves the police dog into the suspect's car.

The attorney said Williams should have held his hands out the car window to surrender and not just hold them up, which he said wasn't enough to stop Brister's attempt to subdue the suspect.

McGuiness said officers actually used restraint, because he said they would have been justified in using lethal force against Williams.

"Yes, I understand Mr. Williams got a dog bite, but he's lucky he didn't have his brains blown out," he said.