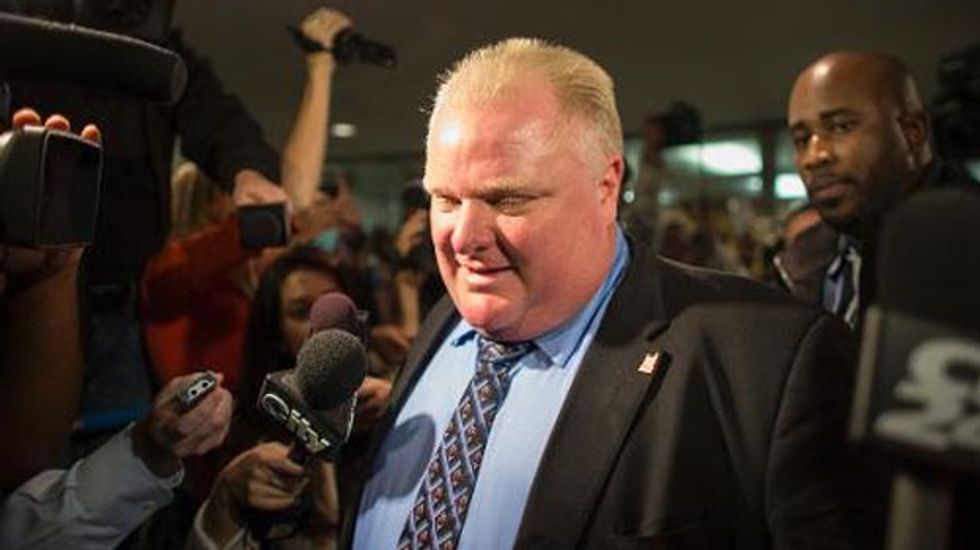 Gaffe-prone Toronto Mayor Rob Ford triggered fresh controversy on Thursday with dubious advice about Christmas shopping for women, just days after apologizing twice for suggesting a reporter was a pedophile.

Ford added that he follows his own advice when it comes to his wife Renata, whom he embarrassed last month with revelations about their sex life.

"At the end of the day, she wants her cash, so I give her a nice cheque and we're all happy," said Ford, who became a global figure of ridicule last month after admitting he had smoked crack in the past.

Ford also suggested dresses and perfumes as alternative gifts for a spouse.

The comments come after Ford apologized in a statement late Wednesday for previous incendiary comments aimed at a city hall reporter who covered the mayor's downfall.

Toronto Star reporter Daniel Dale withdrew his libel and defamation lawsuit but only after Ford's second attempt at contrition, as he deemed a first apology a day earlier was not sincere.

Ford, who was stripped of most of his mayoral powers and duties last month after admitting smoking crack, had been recalling in a television interview a May 2012 confrontation with Dale, who was staking out the mayor's home for a story about him wanting to buy an adjacent city park.

"Daniel Dale is in my backyard taking pictures," Ford said in the interview for Vision TV.

"I have little kids. He's taking pictures of little kids," Ford said. "I don't want to say that word but you start thinking what this guy is all about."

He said he had recounted what had initially been told to him by a neighbour, which later proved to be wrong, and apologized for his "imprecise and inaccurate" description of the event and for insinuating that Dale may be a pedophile.

"It seems that he does something every day and then the next day he at some point in time he has to make another apology.