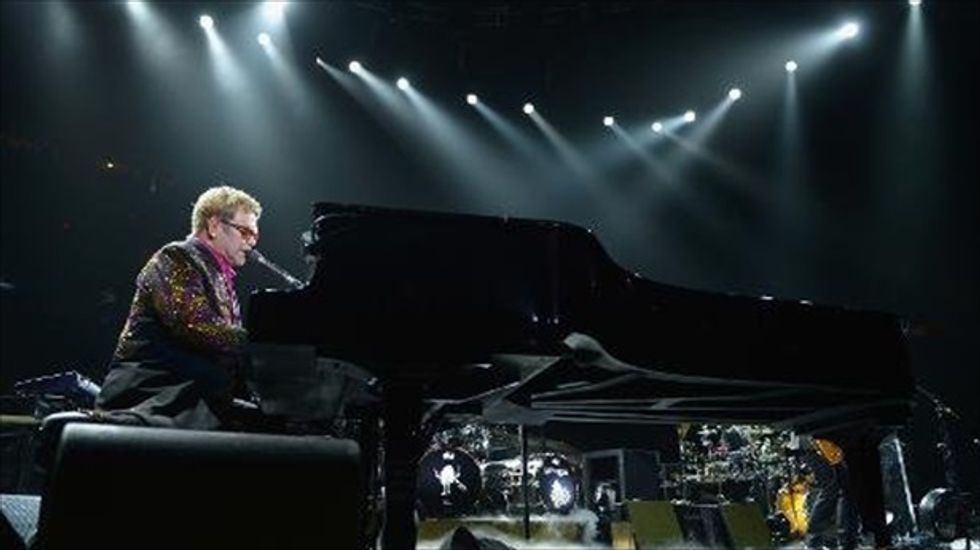 British pop icon Elton John at his Moscow concert on Friday called on Russia to end discrimination against gays and lesbians, the Interfax news agency reported.

The openly gay singer said he was "sad to learn" about a Russian "anti-gay law" which bans what it calls homosexual propaganda to minors, Interfax reported.

"He called for renouncing all discrimination, including that based on non-traditional sexual orientation," the agency said, using an expression in Russia for describing homosexuality.

According to Interfax and several messages on social networks, John dedicated his concert to Vladislav Tornovoi, a 23-year-old man tortured to death in May in Volgograd, in southwest Russia, apparently for being gay.

That sordid crime raised an outcry from the gay community and gay rights activists.

John was the first major Western star known for strong support of gay rights to play in Russia since President Vladimir Putin in June signed a national law banning "propaganda of homosexuality" to minors.

The loosely-worded law, aggressively lobbied by conservative lawmakers, can be used to ban any gay rights event, critics say.

John, 66, publicly announced his homosexuality in 1988 and is in a civil partnership. He and his partner, David Furnish, have two children born to a surrogate mother. The singer is a major backer of programmes to help those with AIDS. In 2009, Ukraine refused to let him adopt an HIV-positive toddler.

Before Russia's national law was signed, US pop stars Madonna and Lady Gaga last year used concerts in Saint Petersburg to speak out on stage against local legislation that went in the same direction.

The promoters of Lady Gaga's concert were fined last month by a Saint Petersburg court under a child protection law which includes a ban on gay propaganda.

Russia decriminalised homosexuality in 1993, but its medical institutions continued to class homosexuality as a mental disorder until 1999.

Russian society remains deeply homophobic, with a survey by the Levada independent polling centre in March finding that 34 percent thought homosexuality was an illness that should be treated.