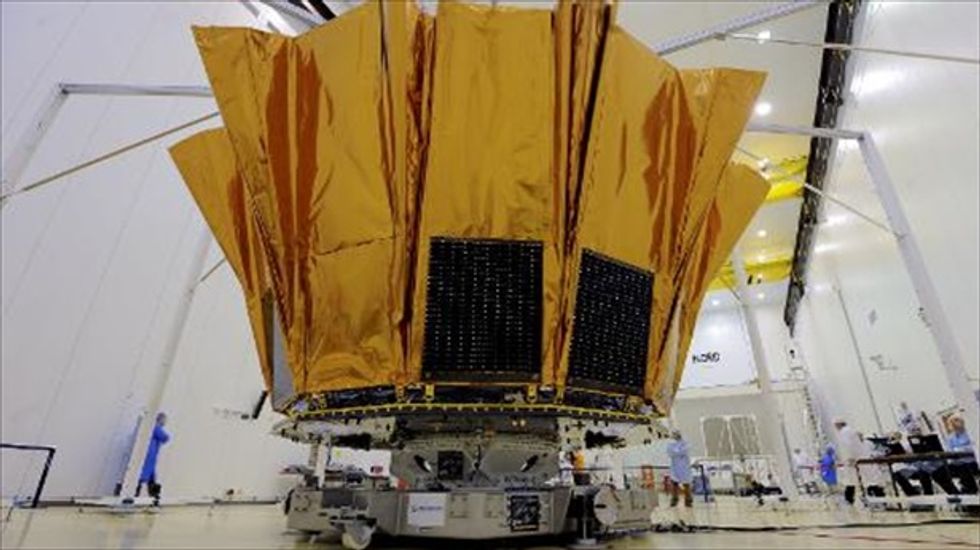 Scientists perform a shield deployment test on Gaia at the European space centre in Kourou on Oct. 10, 2013 [AFP]

Europe on Thursday will place a billion-dollar bet on a space telescope designed to provide the biggest and most detailed 3-D map of the Milky Way.

If all goes well, a Soyuz-STB-Fregat rocket will lift off from Kourou, French Guiana, hoisting the observatory Gaia on a five-year exploration that may sweep away notions of our place in the galaxy.

The most sophisticated space telescope ever built by Europe, the 740-million-euro ($1.02-billion) gadget goes by the unofficial epithet of "discovery machine".

Gaia's primary goal is to carry out an "astronomical census", locating the position of a billion stars, or around one percent of all the stars in the Milky Way.

By repeating the observations as many as 70 times throughout its mission, the telescope can help astronomers calculate the distance, speed, direction and motion of these stars.

"Within two years from now we will have the first compendium of the sky," said Francois Mignard of France's Cote d'Azur Observatory.

Launched in 1989 and in operations for nearly four years, it provided a high-accuracy fix on 118,000 stars, as well as less-precise fixes on two million stars -- a databank that is hugely used by professional astronomers today.

Gaia, using a six-sided "optical bench" three metres (10 feet) across to snare glimmers of light, is 200 times more sensitive than Hipparcos in measuring the angles that, through triangulation, determine a star's position.

"If Hipparcos could measure the angle that corresponds to the height of an astronaut on the Moon, Gaia will be able to measure his thumbnail," ESA says on its website.

Gaia's secondary objectives are equally stunning. By monitoring the "wobble" in stellar light as a planet passes in front of a star, it can add to knowledge about worlds beyond the Solar System.

By some estimates, it could detect as many as 50,000 planets within a distance of 150 light years from the Sun, or 10 times more than have been observed since the first was spotted in 1995.

Gaia will also be turning its eyes to our own Solar System, scouring its chill, dark fringes and the asteroid belt between Mars and Jupiter to help the search for any rocks that may one day threaten Earth.

Gaia may provide a useful test of Einstein's theory of general relativity, which says that a star's position will appear to move slightly as a result of light from it that is deflected by a passing, massive object.

After launch, Gaia will take up position at the so-called Lagrange point L2, located 1.5 million kilometres (937,000 miles) from the Earth.

L2 is a position that gives it year-round observation of the cosmos without the view being disturbed by the Sun, Earth or Moon.

It is the go-to place for space observatories. L2 has been used by Europe's Herschel and Planck telescopes and is designated as the slot for NASA's eagerly-awaited James Webb Space Telescope (JWST).

To stay at L2, the spacecraft will have to perform tiny manoeuvres every month, scrutinised by a network of telescopes on Earth to ensure a hoped-for accuracy of 100 metres (yards).

One of the biggest challenges will be processing what Jean-Yves Le Gall, head of France's National Centre of Space Studies (CNES), calls "an absolute flood" of data.

Gaia will provide the equivalent of more than 30,000 CD-ROMs.

Sorting this stuff and turning it into useable data -- galaxy maps and star catalogues -- will take years.

Six centres have been set up around Europe to handle the deluge, including a supercomputer in Toulouse, southwestern France, capable of carrying out six thousand billion operations a second.