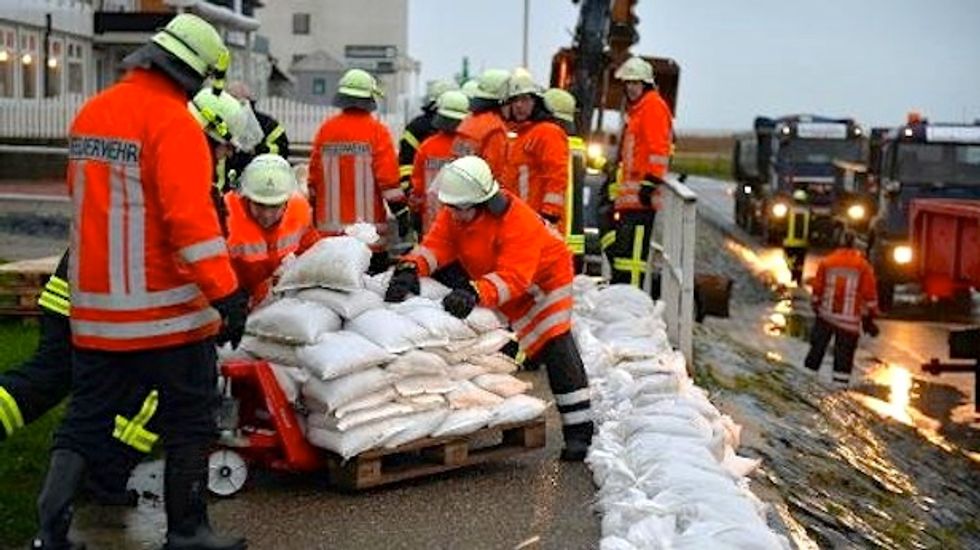 British authorities evacuated 15,000 homes as flooding started on the North Sea coast while Germany, the Netherlands, Belgium, Denmark and Sweden all boosted their flood defenses.

Winds of up to 142 miles per hour were recorded in Scotland and Britain's environment agency said the "surge along the east coast of England is expected to be the worst for more than 60 years."

John Curtin, the Environment Agency's head of incident management, said: "Flooding of coastal communities along the eastern and north west coasts is expected into Friday. Some defences could be overtopped by the combined effect of high tides, high winds and a large tidal surge."

The Met Office said late Thursday that winds were easing but the dangers of a storm surge would remain with high tides expected at around 0900GMT Friday.

Hundreds of flights were cancelled across northern Europe while rail and ferry services were shut down and one of Europe's longest bridges -- connecting Sweden to Denmark -- was closed.

British Prime Minister David Cameron said he had convened the government's emergency committee to ensure necessary measures were being taken, amid fears of a repeat of a 1953 storm surge which killed more than 2,000 people in northern Europe.

In Britain, a lorry driver died when his vehicle toppled onto a number of cars in Scotland, while a man riding a mobility scooter was struck by a falling tree in Nottinghamshire, central England.

Two sailors were reportedly swept overboard from a ship off the southern Swedish coast on Thursday. Air-sea rescue services failed to find them.

In western Denmark, a 72-year-old woman died after strong winds tipped over the van she was driving.

The biggest fear across Europe was from a potentially devastating storm surge which will coincide with high tides.

Police and council officials said they were evacuating 9,000 homes in the county of Norfolk, eastern England, and 1,000 in Essex, southeastern England, before three high tides over the next 36 hours.

Floodwaters had already submerged parts of Newcastle and Hull in northern England, and the environment agency issuing more than 40 individual flood warnings.

London's Thames Barrier was closed, with Data issued Thursday suggesting it was holding the incoming tide at bay.

In the Netherlands -- where 27 percent of the country lies below sea-level -- the landmark Eastern Scheldt storm surge barrier has been closed for the first time in six years.

Dutch authorities said they had issued the highest possible flood warning for four areas in the north and northwest of the country.

Belgium is expected to experience a storm surge of up to 6.1 meters, "the highest for 30 years," said Carl Decaluwe, the governor of West Flanders province.

Germany reinforced emergency services in and around the northern port of Hamburg and cancelled lessons at many schools, while Swedish authorities also issued flood warnings.

There was travel chaos as the storm barreled across the North Sea from Britain towards Germany and northwest Europe.

Many flights from Glasgow, Edinburgh and Aberdeen airports in Scotland were cancelled because of the weather conditions.

An easyJet plane separately made failed attempts to land at both Glasgow and Edinburgh before heading to Manchester in northwest England.

"I'm feeling really lucky to be alive," said Hazel Bedford, a passenger on the easyJet plane.

"Everything started shaking and bumping, we were going up and down, up and down, like a roller coaster. An awful lot of people were being sick."

Rail travel was badly hit, with all train services in Scotland cancelled at one point.

The Oeresund road and rail bridge between Sweden and Denmark closed, as did several Swedish rail lines.

Danish authorities said they were closing down rail services across the country and Germany said it might do the same.

Ferries to Germany from Sweden and Denmark were cancelled.

In Britain, the storm played havoc with power lines. More than 20,000 homes were left without power in Scotland and 6,500 in Northern Ireland.