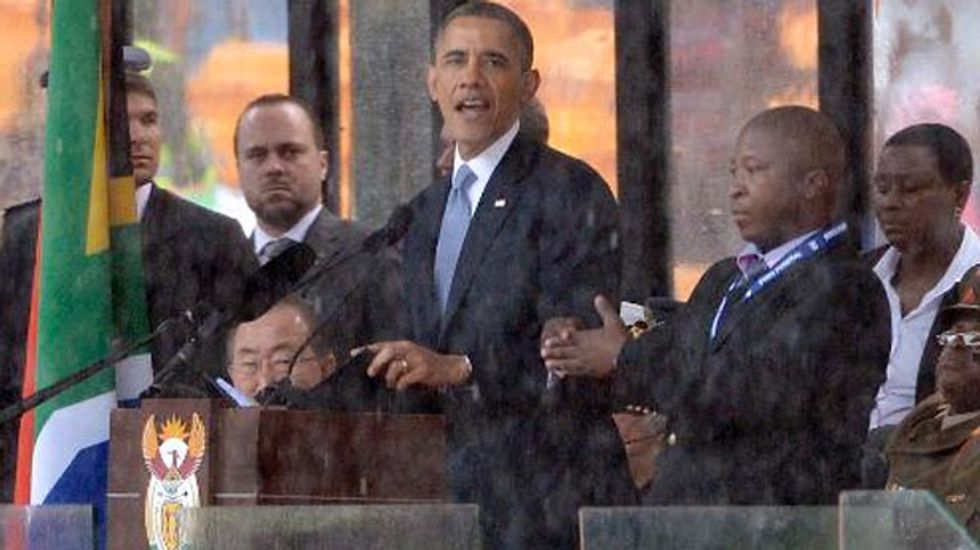 The sign language interpreter at Nelson Mandela's memorial ceremony denied he was a fraud Thursday, claiming he gesticulated nonsense during the service because he was suffering a schizophrenic episode and hallucinating.

Thamsanqa Jantjie has been branded a fraud by members of South Africa's deaf community, who said his signing for US President Barack Obama and other world leaders amounted to little more than "flapping his arms around."

Jantjie on Thursday insisted he was a qualified signer, but said his behaviour was down to a sudden attack of schizophrenia, for which he takes medication.

"There was nothing I could do. I was alone in a very dangerous situation," he told Johannesburg daily The Star, adding that he was hearing voices and hallucinating.

"I tried to control myself and not show the world what was going on. I am very sorry. It's the situation I found myself in," he added.

But Jantjie's explanation appeared to raise as many questions as answers.

South Africa's deaf organisations rubbished the suggestion that this was a one-off problem, claiming they had complained to the government before about Jantjie.

Footage has emerged showing him signing for President Jacob Zuma at the ruling ANC party's 100th anniversary celebrations in 2012.

The South African government on Thursday admitted a "there might be a mistake, where other people might not have understood the interpreter," acknowledging that Jantjie was "not a professional sign language interpreter."

"But I don't think he was picked up from the street," said Hendrietta Bogopane-Zulu, deputy minister for women, children and persons with disabilities, stating that he may have had problems with English or been tired.

Bogopane-Zulu also admitted that the government could not track down the company Jantjie worked for.

"We spoke to them wanting some answers and they vanished into thin air," she said.

"It looks like they have been cheating all along."

The revelations also raise questions about how Jantjie, who was at one point little more than an arm's length away from Obama and UN Secretary-General Ban Ki-moon, was vetted and received security clearance.

The White House referred all questions on the matter to the South African government but said it would be regrettable if the incident overshadowed Obama's "very powerful remarks" at the memorial service.

"It would be a shame if a distraction about an individual who was on stage in any way detracted from the importance of that event and the importance of president Mandela's legacy," deputy spokesman Josh Earnest told reporters in Washington.

Jantjie's efforts at the memorial service triggered outrage in the deaf community and prompted a government investigation.

Cara Loening, director of Sign Language Education and Development in Cape Town, labelled him a "complete fraud" whose signing looked like someone "trying to swat a few flies away from his face and his head".

Asked why he didn't just leave the stage, Jantjie said that, given the historic importance of the event, he felt compelled to stay even though he could not hear or concentrate properly.

"Life is unfair. This illness is unfair," he said.

"Anyone who doesn't understand this illness will think that I'm just making this up."

Jantjie's signing appeared at odds with that of the public broadcaster's signer, who was shown in a small insert box on SABC television screens.

The South Africa's Translators' Institute on Wednesday said they already had reservations about Jantjie.

The institute's chairman Johan Blaauw said there had been complaints over his work on previous occasions but the ruling party took no action.

The government denied that the scandal had damaged the country's reputation.

"Are we embarrassed as a country? I don't think it is the right choice of word," Bogopane-Zulu said.