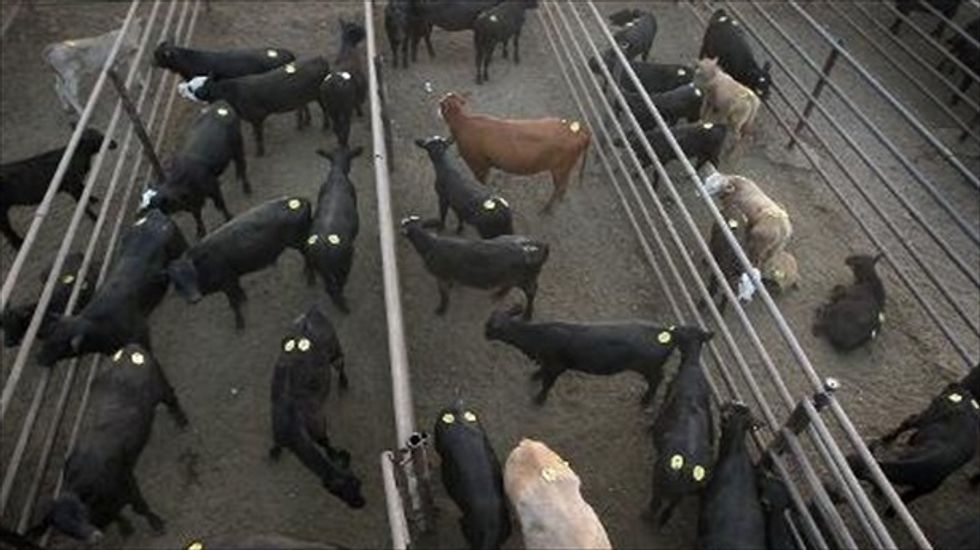 Cattle are held in a pen after being sold at the Abilene Livestock Auction on July 26, 2011 in Abilene, Texas (AFP)

In response to concerns about the rise in drug-resistant superbugs worldwide, US regulators Wednesday issued voluntary guidelines to help cut back on antibiotics routinely fed to farm animals.

The plan described by the Food and Drug Administration is not mandatory, and applies only to certain pharmaceuticals that are given to healthy livestock in a bid to grow bigger animals and boost food production.

"We need to be selective about the drugs we use in animals and when we use them," said William Flynn, deputy director for science policy at the FDA's Center for Veterinary Medicine.

"Antimicrobial resistance may not be completely preventable, but we need to do what we can to slow it down."

The FDA guidelines set out a three-year timeframe for phasing out the use of antibiotics that are important in human medicine for growth uses in farm animals.

Companies that make animal feed containing antibiotics would be restricted to marketing them only for sick animals.

The medicines would also have to be administered or prescribed by a veterinarian with a view to preventing or controlling disease.

The World Health Organization says inappropriate use of antimicrobial medicines in farm animals is one the factors underlying the spread of drug-resistant infections in people, including tuberculosis, malaria and gonorrhea.

Other factors include people's failure to complete the full doses of antibiotics when sick and the lack of a coordinated global response to dangerous illnesses.

Consumer advocates say 80 percent of antibiotics sold in the United States are destined for use in livestock, so leaving the responsibility in the hands of business is a mistake.

Louise Slaughter, the only microbiologist in Congress, described the FDA's voluntary guidance as "an inadequate response to the overuse of antibiotics on the farm with no mechanism for enforcement and no metric for success."

This guidance "falls woefully short of what is needed to address a public health crisis," she added in a statement.

The Center for Science in the Public Interest said there are "several loopholes" in the FDA plan that could undermine its aim.

"Unfortunately it requires the drug companies who profit from sales of their drugs to initiate the process," said CSPI food safety director Caroline Smith DeWaal.

"The good news is that the agency has pledged to evaluate levels of compliance and inform the public after 90 days if the drug industry is cooperating with the relabeling effort."

Industry representatives, including the Animal Health Institute, said they would comply with the FDA plan.

"We strongly support responsible use of antibiotic medicines and the involvement of a veterinarian whenever antibiotics are administered to food producing animals," the AHI said in a statement.

"Animal health companies have supported this policy since it was announced in 2012 and will continue to work with FDA on its implementation."