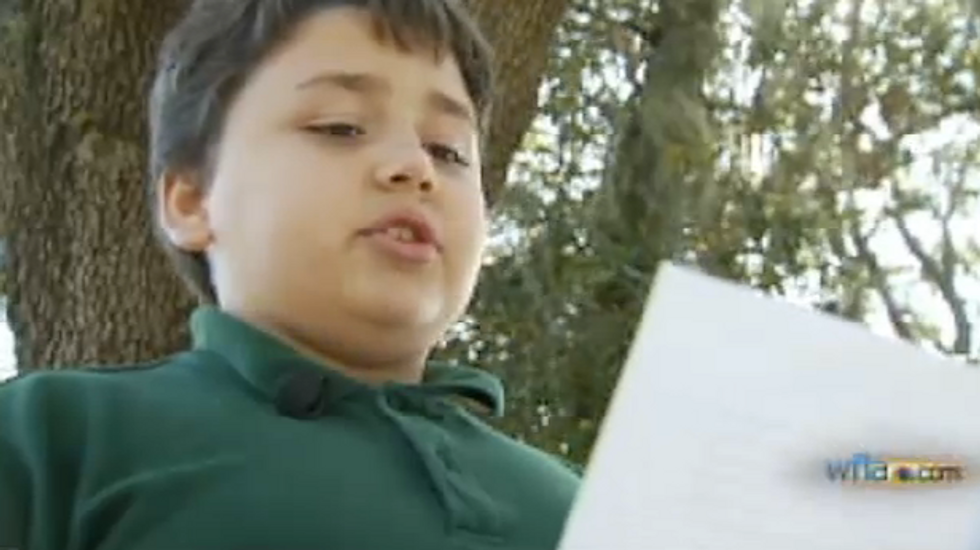 A Florida fifth-grader said he was stripped of his blue ribbon and barred from taking part in a speech competition because his essay mentioned harm caused by religion.

Zachary Golob-Drake said he won first place Wednesday in his class at Tampa’s Patel Partnership School for his speech, “In The Name of Religion.”

The boy said the world’s religions all taught to peacefully coexist with others, but he said that practitioners have found ways to bend the rules – sometimes even to justify taking a life.

“Religious differences have always sparked conflict, even leading to warfare and mass murder,” Golob-Drake wrote, citing the Crusades, the reign of Genghis Khan and the Sept. 11, 2001, terrorist attacks.

The boy noted that Confucius had developed the Golden Rule -- “Do not do to others what you do not want them to do to you” -- more than 2,500 years ago, and that both Jesus Christ and Muhammed had taught similar ideas.

“This world would be a better place if everybody followed that rule,” Golob-Drake wrote at the conclusion of his essay.

He’d been scheduled to deliver the speech Thursday morning along with the fourth-grade class winner and then represent his school at the regional 4-H Tropicana Public Speech contest.

But Golob-Drake pulled him aside before school was dismissed and told that his speech was inappropriate.

"She started talking to me about how she thought my speech wasn't appropriate for 4th- and 5th-graders and she thought that probably I would have to rewrite my speech, take the religion out or not compete," the boy said.

Golob-Drake said he wanted to think about her request at home, and the assistant principal asked for his first-place award.

"She said to me probably the fairest thing to do is to take your ribbon," the boy said.

When his older brother picked him up from school, Golob-Drake was crying.

His brother spoke to the assistant principal, and she ended up giving back the ribbon.

But their mother spent about four hours on the phone with school officials and representatives from the speech contest.

The school decided to postpone the contest until Monday, and parents of all students in the fourth and fifth grades will be given a list of speech titles and asked to decide whether their child should not hear any of them.

"The concern was over the topic of mass murders, because these are fourth- and fifth-graders," Arja said.