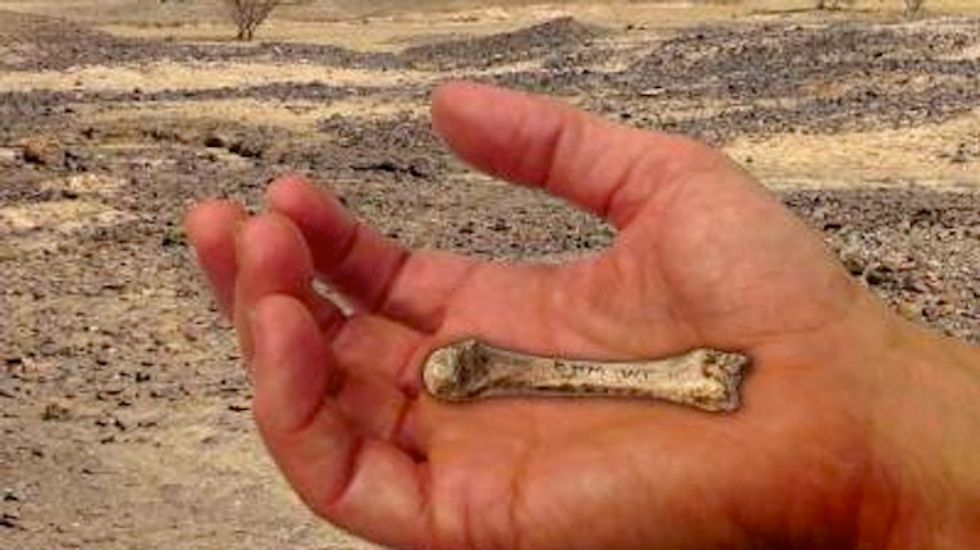 The discovery of a fossilized hand bone closes the human evolutionary gap by about half a million years, scientists say.

A team of researchers from the University of Missouri found the new hand bone from a human ancestor who lived about 1.42 million years ago in East Africa.

Humans have a hand anatomy that’s distinct from apes and other nonhuman primates that allows them to make and use tools, but scientists aren’t sure when those features first appeared in human evolution.

But the newly discovered bone fragment, which may have come from the early human species Homo erectus, is the earliest evidence of a modern, human-like hand, indicating the distinctive anatomical features existed more than 500,000 years earlier than previously thought.

The study was published this week in the Proceedings of the National Academy of Science.

The bone is the third metacarpal in the hand, connecting to the middle finger, and was discovered at the Kaitio site in West Turkana, Kenya, said Carol Ward, professor of pathology and anatomical sciences at Missouri.

"What makes this bone so distinct is that the presence of a styloid process, or projection of bone, at the end that connects to the wrist,” Ward said. “Until now, this styloid process has been found only in us, Neandertals and other archaic humans."

The styroid process allows the hand bone to lock into wrist bones, which allows for greater pressure to be applied to the hand and wrist by a grasping thumb and fingers.

"The styloid process reflects an increased dexterity that allowed early human species to use powerful yet precise grips when manipulating objects,” Ward said. “This was something that their predecessors couldn't do as well due to the lack of this styloid process and its associated anatomy.”

Ward said a lack of styroid process created difficulties for apes and earlier humans when they tried to make or use tools and may have increased the risk for arthritis.

“This may not be the first appearance of the modern human hand, but we believe that it is close to the origin, given that we do not see this anatomy in any human fossils older than 1.8 million years,” Ward said. “Our specialized, dexterous hands have been with us for most of the evolutionary history of our genus, Homo. They are – and have been for almost 1.5 million years – fundamental to our survival."

[Image courtesy of the University of Missouri]