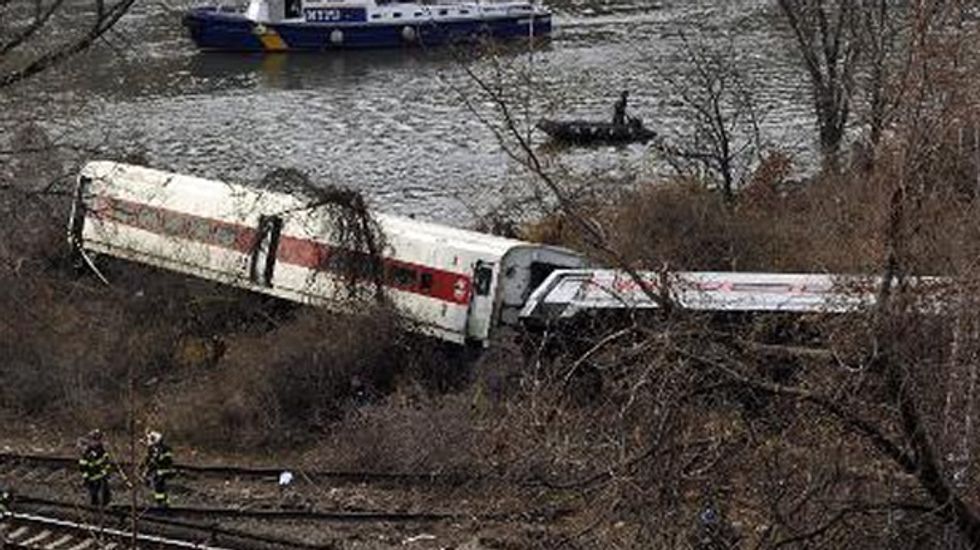 Aerial television pictures of the scene showed at least four of the train's eight carriages on their side, facing down a hill just short of the waters of the Hudson River, following a long curved section of the track.

New York Fire Department said on Twitter that the accident occurred close to Spuyten Duyvil railroad station, without giving any details on casualties.

However CNN, citing emergency officials, reported that four people had died and that 40 others were injured. It was unclear whether the Metro-North train was crowded or not when it derailed shortly after 7:00 am (1200 GMT).

NBC television also reported that four people were dead. There was no official confirmation of the casualties.

CNN reported that 100 firefighters were at the scene and cited emergency workers as saying there are "many injured."

The southbound train was traveling from Poughkeepsie to Grand Central Terminal when the accident occurred.

Sunday marks the end of America's Thanksgiving holiday, which annually sees many people take time off to enjoy a long weekend and travel home to their families across the United States.

The Fire Department said five rail cars left the tracks during the derailment.

Metro-North Railroad said on Twitter that the Hudson Line service between Grand Central Terminal and Croton Harmon was currently suspended because of the accident.

"Alternate transportation through that area is being arranged. We will provide more information as it becomes available," the company said in a second tweet.

The US National Transportation Safety Board (NTSB) investigates the causes of all passenger travel accidents and is expected to launch a probe into Sunday's derailment.