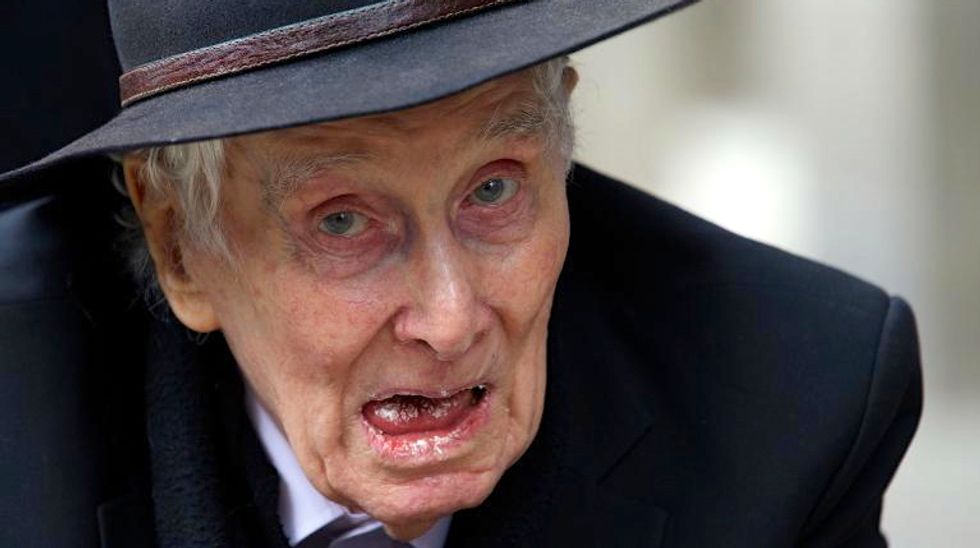 Great Train Robber Ronnie Biggs, whose audacious escape from jail and decades spent on the run made him one of Britain's most notorious criminals, has died in London at the age of 84, the justice ministry said on Wednesday.

Biggs, who was unable to speak and could barely walk after suffering a series of strokes, was being cared for at a nursing home at the time of his death in the early hours of Wednesday morning, media reports said.

He was part of the gang which robbed a night mail train travelling from Glasgow to London on August 8, 1963, seizing £2.6 million -- a record at the time and the equivalent of £46 million (54 million euros, $75 million) today.

Sentenced to 30 years in jail, Biggs escaped from prison after just 15 months and went on the run to Australia and then Brazil.

In Rio he had a son, Michael, with a Brazilian woman which ensured his immunity from extradition.

Michael Biggs was not immediately available for comment about his father's death, but left a message on his phone saying: "For obvious reasons I'm not taking many calls today."

Free from the long arm of the British law, Biggs appeared to revel in his notoriety, posing for pictures published in newspapers back home and cementing his folk hero status.

Biggs returned to Britain voluntarily in 2001 when a number of strokes took the fun out of fugitive life and left him pining for home.

He was immediately sent back to jail to serve the end of his sentence but was released on compassionate grounds in 2009 because of his worsening health.

He remained on parole. "The probation trust supervising him has confirmed that he has died," a justice ministry spokeswoman told AFP.

Biggs always said he had no regrets about his involvement in the heist, although he said it was "regrettable" that the train driver, Jack Mills, was hit during the robbery.

Biggs was last seen in public in March at the London funeral of fellow Train Robber Bruce Reynolds, where he made a defiant "V" sign at the waiting media.

The press pack that awaited him was a sign of the enduring fascination in Britain with the train heist and particularly Biggs, who was widely viewed as a loveable rogue.

The former head of London's Metropolitan Police, Robert Mark, observed in his memoirs that Biggs had "added a rare and welcome touch of humour to the history of crime", according to an obituary published on the Guardian website.

By coincidence, the BBC was due to screen two new films about the robbery on Wednesday and Thursday night. They are expected to be broadcast as planned.

Peter Rayner, former chief operating officer of British Rail, had criticised the sympathy for Biggs in the past, although he said his thoughts were with his family following his death.

"My view is that whilst I was -- and am -- critical of the Great Train Robbers and the heroes' welcome they got, especially in light of the death of Jack Mills, my sympathies go out to his family," he said.