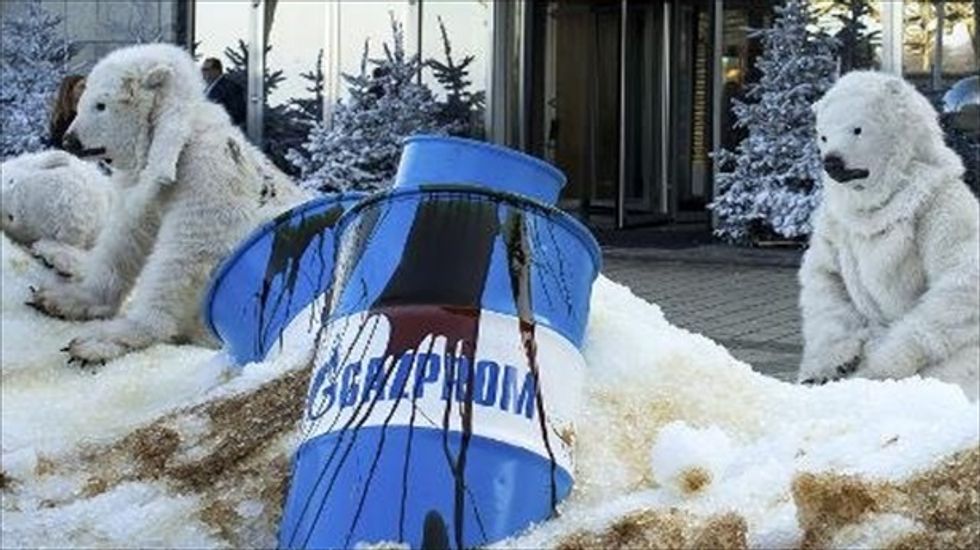 Activists in polar bears costumes protest against Gazprom on Dec. 3, 2013, in Geneva [AFP]

Eight Greenpeace activists were taken into custody Tuesday after an elaborate protest at a Geneva energy conference, including polar bears wading in oil-soaked snow and oil-spill cocktails served to conference participants.

"Eight activists were taken into custody for questioning," Geneva police spokesman Jean-Philippe Brandt told AFP, adding that it was unclear how long they would be held.

Protesting planned Arctic drilling by one of the main sponsors of the conference, Russian energy giant Gazprom, activists poured piles of sparkling snow outside the luxury Geneva hotel hosting the event before drizzling on oil from barrels carrying the oil company's logo.

Activists dressed as polar bears rolled around in the mess as others unfurled a massive banner from the roof of the President Wilson hotel proclaiming "Arctic Spoil -- brought to you by Gazprom", a video of the demonstration showed.

One woman briefly passed herself off as a Gazprom representative, launching into an empassioned speech against the company's activities, but was quickly shuttled out by security.

The speech meanwhile continued on an audio system installed in the room that could not be turned off and that was eventually smashed by security, the group said.

"Greenpeace and the millions of Arctic defenders worldwide will not be silenced by Gazprom or any other company, like Shell for example, who wants to exploit the Arctic," the recording said, according to a Greenpeace statement.

The protesters also mentioned their 30 colleagues who were seized by Russian security forces off a Greenpeace ship in the Barents Sea after a September protest on a Gazprom oil rig.

After two months in a Russian jail facing charges of piracy, later reduced to hooliganism, they were granted bail last month.

"Oil from the Arctic cannot be burned without tipping the world into runaway climate change," Tuesday's recording said, adding: "No wonder the Arctic 30 Greenpeace activists felt they had to challenge Gazprom in the Russian Arctic."