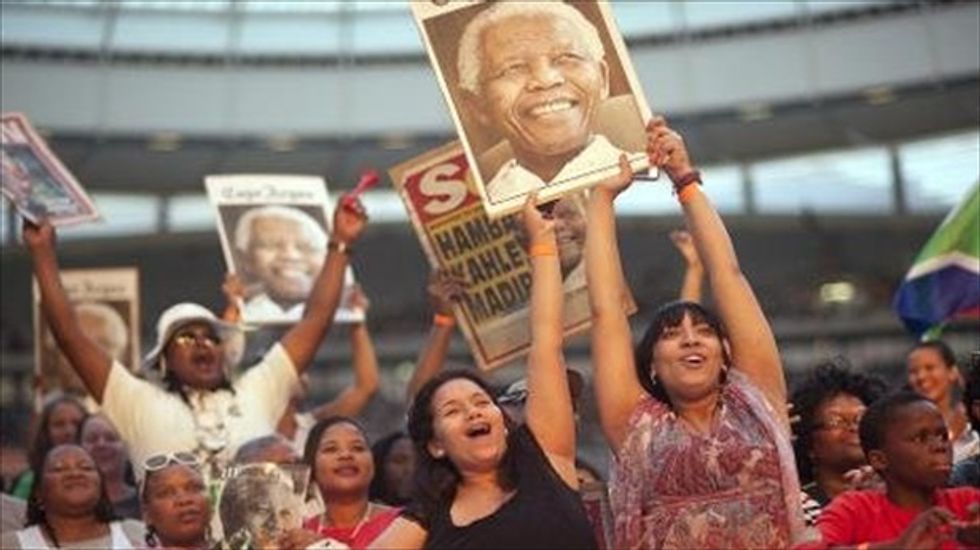 Tens of thousands of South Africans danced and sang for Nelson Mandela on Wednesday as formal ceremonies were put aside to celebrate the hero who was known for his own trademark shuffle.

International and local stars from Johnny Clegg to Annie Lennox took to the stage in the free concert in Cape Town to pay tribute to Mandela's remarkable life and journey.

"This is what he would have liked because he liked music very much," said Nodumo Dayimani, 33.

"He knows how we celebrate in South Africa -- we like to sing, we like to dance. I'm sure he would have loved it."

Sitting a stone's throw from the stage, Dayimani said she was there to pay her last respects to "a great man".

"The last few days were very formal and very difficult for all of us. Now that we have accepted everything...it's time for us to celebrate his life."

Posters of Mandela waved across the crowd in the stadium, which a city official estimated at between 40,000 and 50,000, alongside South Africa's democratic flag.

While there were occasional tears when the music saw emotions spill over, the dominant atmosphere was joyful as the crowd overcame the blow of his death by letting their hair down.

"We're celebrating his life," said Maryam Valodia, 20, who was born the year before Mandela became president in 1994.

While she had shed "happy tears", she said the concert was fitting as "Madiba was a very happy person", referring to his clan name as he was affectionately known

"We love Madiba. He's our father and we are his nation," said Valodia.

"I didn't personally know him but what he did for us -- it's just love."

A poignant moment was when Clegg, know as the "White Zulu", sang his powerful anti-apartheid ballad "Asimbonanga" which tells of not having seen Mandela when he was in apartheid prison and saw voices in the crowd rise up to join him.

In 1999, Mandela joined Clegg on stage when he was performing the song in France, dancing with both arms swaying and his feet shuffling in delight at the music, with the video a hit online.

Instead of performing any of her top hits, Annie Lennox gave a spoken performance calling to fight HIV and violence against women.

"Protect yourself, safe sex!" she chanted, with the crowd adding their voices in the nation with the world's biggest HIV positive population.

While the focus was on music, there were also a few brief speeches from politicians to sporting star former Springbok rugby captain Francois Pienaar who received the World Cup in 1995 from Mandela who was wearing a replica of his jersey in a historic gesture of unity.

Speaking for the country's sports teams and stars, Pienaar thanked Mandela whom he called "our spiritual coach and our captain".

"A herd boy became one of the greatest leaders the world has ever seen. From prisoner to president."