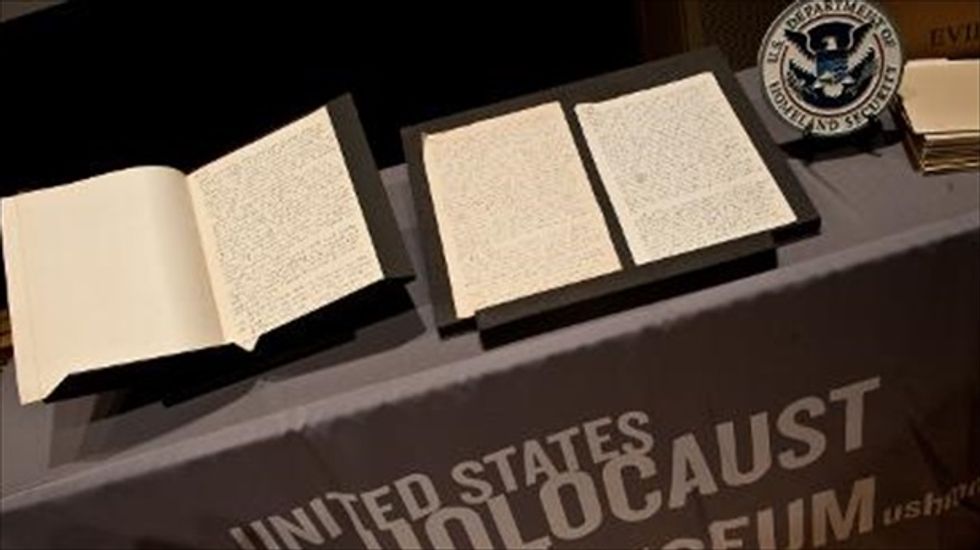 Pages from the diary of German Nazi ideologue Alfred Rosenberg are displayed at the Holocaust Memorial Museum in Washington, DC on Dec. 17, 2013 [AFP]

The US Holocaust Memorial Museum took possession Tuesday of a Nazi war criminal's long-lost diary and posted it online to help researchers decipher the thinking behind Adolf Hitler's "final solution."

The Rosenberg Diary, kept by a confidant of Adolf Hitler whose racist theories underpinned Nazi Germany's annihilation of six million Jews and five million others, had been missing since the Nuremberg War Crimes Trials ended in 1946.

For years the museum had been working with US judicial officials and law enforcement agents to recover Alfred Rosenberg's writings, most recently in the hands of an upstate New York publisher.

"Today that search ends," said museum director Sara Bloomfield at a ceremony where the US government formally transferred possession of the 425 pages of typed and handwritten papers.

The entire diary is available to the public in the archives section of the holocaust museum's website (www.ushmm.org) alongside a transcript in German, with hard-copy versions expected starting next year. It covers a 10-year period from 1934.

"There might be other pieces that are still out there," said Juergen Matthaeus of the museum's Center for Advanced Holocaust Studies, who noted that a chunk of 1942 is missing from the diary.

On its own, he said, the diary contains no stunning revelations. Rather, its real value comes when it is put into the context of Holocaust documentation.

"This is more a piece of a huge puzzle with many pieces that all need to be brought together," he told reporters.

The US Immigration and Customs Enforcement (ICE) agency, which investigates cases of missing or stolen cultural property, says it was first taken in the late 1940s by a Nuremberg prosecutor, Robert Kempner, "contrary to law and proper procedure."

Kempner, a German-Jewish lawyer who escaped to the United States during World War II and settled in Pennsylvania, held on to the diary until his death in 1993.

Some early pages, used at the Nuremberg trials, have been in the possession of the Holocaust Memorial Museum in original and copied form.

But the vast bulk of the diary remained missing until November 2012 when the US Attorney's office in Delaware and Homeland Security special agents got a tip from an art security specialist working with the museum.

The diary was ultimately traced to the home of academic publisher Herbert Warren Richardson outside Buffalo, New York; he had apparently received it from one of Kempner's assistants.

Through legal proceedings, the US government reasserted ownership of the papers, which prior to Nuremberg had been seized by US military occupation forces in Germany at the end of World War II.

In his role as the Nazis' chief racial theorist, Rosenberg was instrumental in developing and promoting the notion of a German "master race" superior to other Europeans and, above all, to non-Europeans and Jews.

Born in 1893 into an ethnic German family in what is today Estonia, Rosenberg, who loathed Christianity and "degenerate" modern art, doubled as Hitler's point man in occupied eastern Europe and Russia throughout the war.

He was also tasked by Hitler to oversee the systematic plundering of countless works of art throughout occupied Europe, many of which remain missing to this day.

Captured by Allied troops at the end of the 1939-45 war, Rosenberg was convicted at Nuremberg of war crimes, crimes against humanity, initiating and waging wars of aggression, and conspiracy to commit crimes against peace.

He was executed with several other convicted Nazi leaders on October 16, 1946. He was 53.