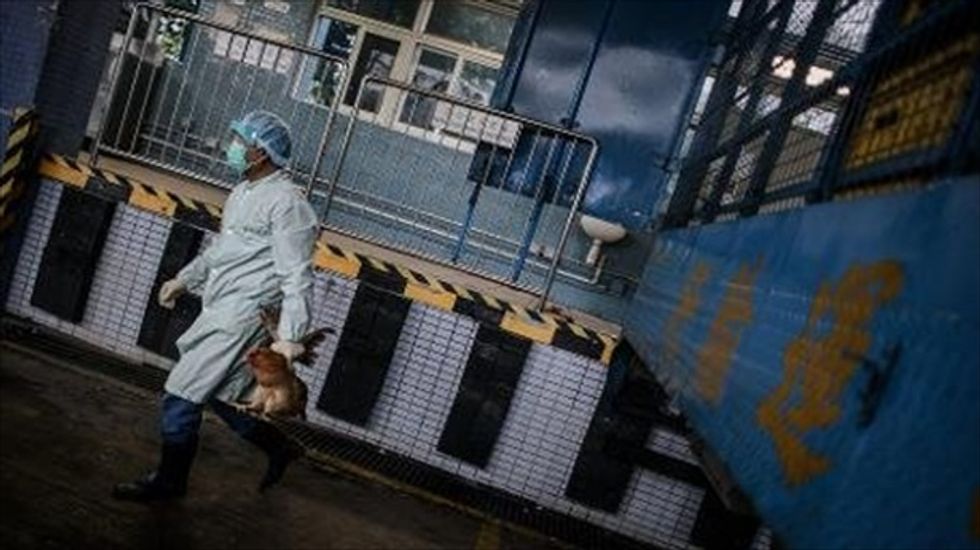 An official holds a chicken during the checking of poultry at the border with mainland China in Hong Kong on April 11, 2013 [AFP]

Extra health officials have been deployed to carry out random temperature checks at entry points to the southern Chinese city, which already have thermal imaging systems.

The health department has liaised with border officers in the neighbouring mainland China city of Shenzhen to stay alert for travellers and cross-border students with fever or other symptoms, a government spokesman told AFP.

Suspected cases of avian influenza would immediately be referred to public hospitals.

Inspections were being stepped up at all entry points including from Shenzhen.

Hong Kong on Monday announced that a 36-year-old Indonesian helper was its first human case of H7N9.

"She has a history of travelling to Shenzhen, buying a chicken, slaughtering and eating the chicken," health minister Ko Wing-man said then.

Hong Kong has said that 17 people, mostly relatives of the employer of the domestic helper, will be quarantined.

More than 220 other people are under medical surveillance but not quarantined.

Even though Hong Kong's health department has contacted authorities in Shenzhen, attitudes towards the virus remain relaxed in the mainland city, media reports said.

Sterilisation measures have been lax in Shenzhen's wet markets which are still open for business, the South China Morning Post reported.

In all, 137 human cases of H7N9 have been reported in mainland China since February with 45 deaths, according to the World Health Organisation.