'I no longer fear anything': Kiev protests continue after failed police raid 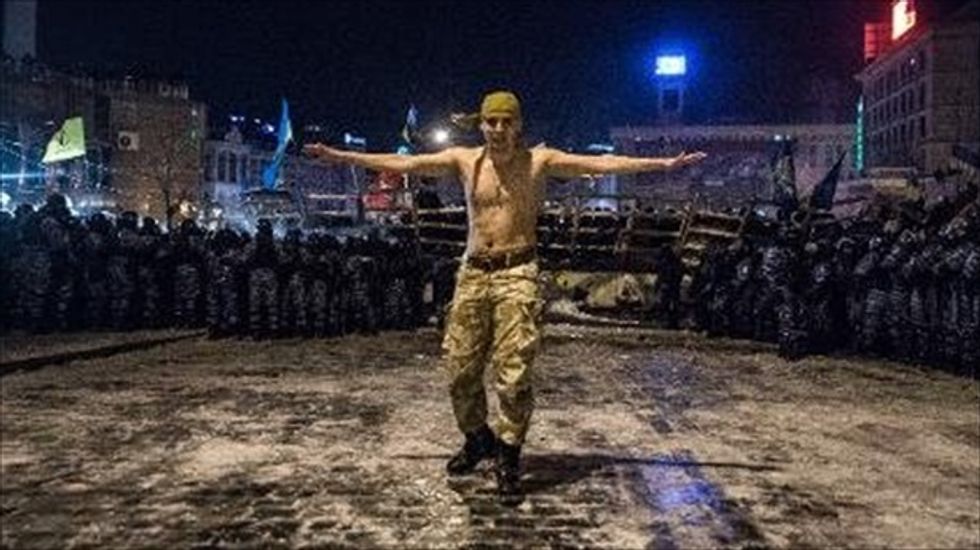 A protester stands next to riot policemen getting ready to launch an assault to a barricade held by protesters on Independence Square in Kiev late on Dec. 11, 2013 [AFP]

A police raid may have reduced their protest barricades to a pile of snow, but it has only made the demonstrators on Kiev's Independence Square more determined than ever.

"I no longer fear anything," said 54-year-old Anna Melnik, who braved sub-zero temperatures to head to the Ukrainian capital's iconic square in the early hours of Wednesday.

"We must support the protest. We hope to live better," said Melnik, who was among thousands who resisted police efforts to clear the area.

Singing the national anthem, dancing and drinking hot tea to fortify themselves against the bitter cold, the crowd occupying Kiev's central square has demanded President Viktor Yanukovych's resignation ever since he decided not to sign an EU pact in a dramatic U-turn.

Around midnight on Tuesday, after nearly three weeks of anti-Yanukovych rallies, hundreds of helmeted riot police troops massed on the edge of the square against the hodgepodge barricades put up by the demonstrators.

Scattering protesters, they dismantled the barricades and tents on one part of the square in scenes that, though tense, were far from the violence of the night of November 30, when a similar attempt was made to tear the protest camp apart.

But at dawn, more than 10,000 people showed up at the square to face the neat rows of riot police shields in the morning twilight and refused to budge until the troops apparently received orders to leave several hours later.

Volodymyr Sundak, who has lived in Kiev for 27 years, headed to the square as soon as the subway opened Wednesday.

"If we stick together, we will stand fast," said the 66-year-old, criticising Yanukovych for "no longer hearing us".

"The fact that he did this shows that he is acting completely irrationally," Sundak said of the night raid on the square. "It's impossible for him to stay (in power)."

Standing close by, bundled in Ukraine's blue and yellow national flag, 61-year-old Iliya Pipska said she came to Kiev from the western city of Lviv to be part of the action.

"I don't want to look at this from afar," she said. "I have family in Poland and in Russia, and we can have good relations (with other countries) without taking orders."

The opposition criticises Moscow for pressuring Ukraine's government into scrapping the EU deal that would have put the country on the path to future integration.

On Kiev's snow-covered Khreshchatik boulevard, thousands surrounded the capital's City Hall, turned into a protest headquarters ever since it was seized by the opposition over a week ago.

Police attempted to drive protesters out of the building, but they responded with sticks and poured water on the troops with fire hoses, forcing them to retreat into their buses.

"What is happening shows it's worth the effort," said Sergiy Markin, a 28-year-old computer programmer who comes to help out every morning before heading to work.

"If everyone is afraid, we'll accomplish nothing," said Marianna, 30, standing guard by the entrance to the City Hall.

Sporting an orange hard hat near a tent pitched on Khreshchatik, 25-year-old Vitaly agreed: "There will be time to go home once the president leaves office."