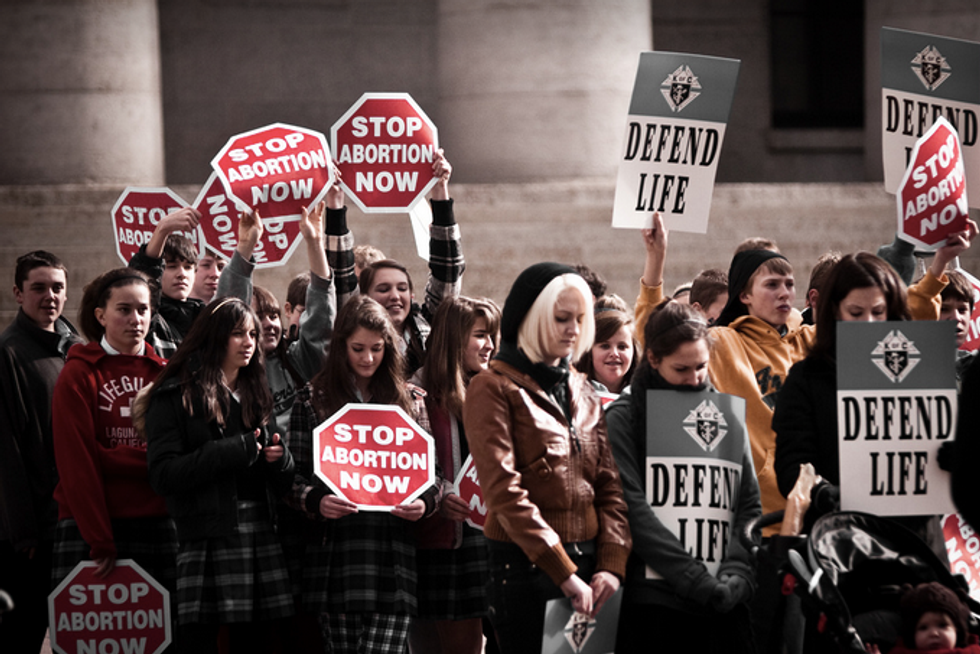 Women in Ft. Wayne, Indiana will not have access to legal abortions as the solitary physician who performs the procedures is forced to temporarily suspend operations by anti-choice legislation. According to the Ft. Wayne News Sentinel, Dr. Ulrich Klopfer will continue to practice, but only at his offices in South Bend.

Women who need abortions will "have to drive another 100 or 200 miles," Klopfer told the paper. "That will add to their cost and hardship.”

Klopfer's Ft. Wayne practice fell victim to Republican-sponsored anti-choice legislation. The so-called "Patient Protection Act" requires any physicians performing abortions in a municipality in the state to have a local partner physician and to obtain admitting privileges to local hospitals. These types of laws have been passed in multiple states -- allegedly as a means of protecting women's health -- as a way to make abortions more difficult to obtain.

Unable to find adequate staff, many clinics have been shut down, forcing women to travel sometimes hundreds of miles to obtain reproductive health services that have been protected under U.S. law since the U.S. Supreme Court's Roe v. Wade decision in 1973.

In his Dec. 12 letter, Cly wrote that "(f)urthermore, you told an online news publication, RH Reality Check, that you now advise girls under 14 and their parents or guardians that they can go to Illinois or Ohio to avoid (Indiana's) under-14 reporting requirement for child sexual abuse."

RH Reality Check reported in November that anti-choice activists are abusing the state's statutory rape laws to harass Klopfer out of business. In February, a 13-year-old girl came to Klopfer's Ft. Wayne office in need of an abortion. Klopfer performed the procedure and faxed a report to state health authorities as mandated by law.

However, he did not include information as to who impregnated the teen, nor did he contact Child Protective Services, assuming that the two state agencies would communicate with each other.

Allen County Right to Life has seized on the case as a means of attacking Klopfer professionally. The group insists -- in spite of a total lack of evidence -- that the girl was molested by an older man and that Klopfer's failure to provide his identity allowed the man to go free.

“It’s heartbreaking to learn that a 13-year-old became pregnant and now must live with the pain of an abortion for the rest of her life, but it’s doubly heartbreaking that Dr. Klopfer’s failure to report the abortion may have allowed the girl’s molester to walk free,” said a press release from Allen County Right to Life director Cathie Humbarger.

Klopfer told the publication that the state's mandatory teen abortion reporting laws are invasive and that families who do not want their daughters' procedures to be made a matter of public record should travel instead to Illinois or Ohio.

Anti-choice groups have bombarded Indiana's regulatory boards with complaints about Klopfer, but the doctor said that his "hiatus" from performing abortions in Ft. Wayne is only temporary as he seeks another local doctor to partner with.

Humbarger admitted to the News-Standard that her group's success is a temporary gain, but called it "tremendous news for desperate mothers and babies vulnerable to abortion. Our goal has been to make Allen County abortion-free.”

For his part, Klopfer told the paper that it's a shame local activists are more concerned with his actions than with the rampant sexual abuse by Catholic clergy. The suspension of his once-weekly visits to Ft. Wayne will only harm women, he said, by adding to the hardships they face while making the difficult decision to terminate a pregnancy.