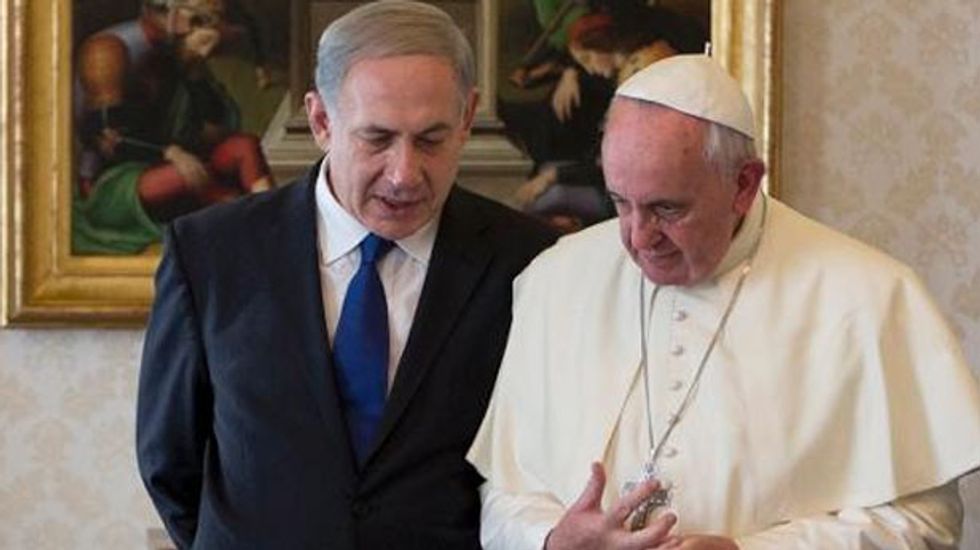 Israeli Prime Minister Benjamin Netanyahu met Pope Francis on Monday as part of a visit to Rome during which he restated his firm opposition to a nuclear deal with Iran.

Netanyahu was received for the first time for a short audience by the pontiff, who is expected to travel to the Middle East next year.

Francis and Netanyahu met for 25 minutes for closed-door talks in the presence of an interpreter.

The Israeli PM gave the pope a Spanish translation of his father Benzion Netanyahu's book "The Origins of the Inquisition in Fifteenth Century Spain".

The dedication was made out to "Pope Francis, a great shepherd of our common heritage".

Netanyahu and Francis had been expected to discuss negotiations between Israel and the Palestinians, which resumed in July after a three-year hiatus but have faltered due to Israeli plans for new settlement building.

Although no date has been made official, sources on both sides say it is likely to take place on May 25-26.

Israel and the Vatican first established full diplomatic relations in 1993, but have been engaged in years of thorny diplomatic negotiations over property rights and tax exemptions for the Catholic Church, which have yet to be fully resolved.

Netanyahu is set later Monday to hold a meeting with his Italian counterpart Enrico Letta, and a joint press conference is expected at around 1400 GMT.

On Sunday, the Israeli premier attended a candle-lighting ceremony in Rome's main synagogue, restating his firm opposition to an international nuclear deal with arch-foe Iran.

"It is very easy to receive a pat on the shoulder from the international community, to bow one's head," Netanyahu said.

"I would like to dispel any illusions. Iran aspires to attain an atomic bomb. It would thus threaten not only Israel but also Italy, Europe and the entire world," he was quoted as saying on his website.

"There should be no going astray after the attack of smiles. Today there is a regime in Iran that supports terrorism, facilitates the massacre of civilians in Syria and unceasingly arms its proxies," he said.

Iran has agreed to curb its nuclear programme for the next six months in exchange for limited sanctions relief following marathon in Geneva last month.

But Israel has slammed the deal as an "historic mistake" and US Secretary of State John Kerry is due in Israel this week to try to ease tensions.

Tehran has a long history of belligerent statements toward the Jewish state, and Israel -- the Middle East's sole if undeclared nuclear power -- has warned that a nuclear Iran would pose an existential threat.

US President Barack Obama's administration has argued that the preliminary deal will help ensure the security of the Middle East region as it seeks to nail down a comprehensive settlement with Iran.

Iranian President Hassan Rouhani, who was elected earlier this year, has promised a more diplomatic approach to the West after eight years of stalled talks and escalating sanctions under his hardline predecessor, Mahmoud Ahmadinejad.