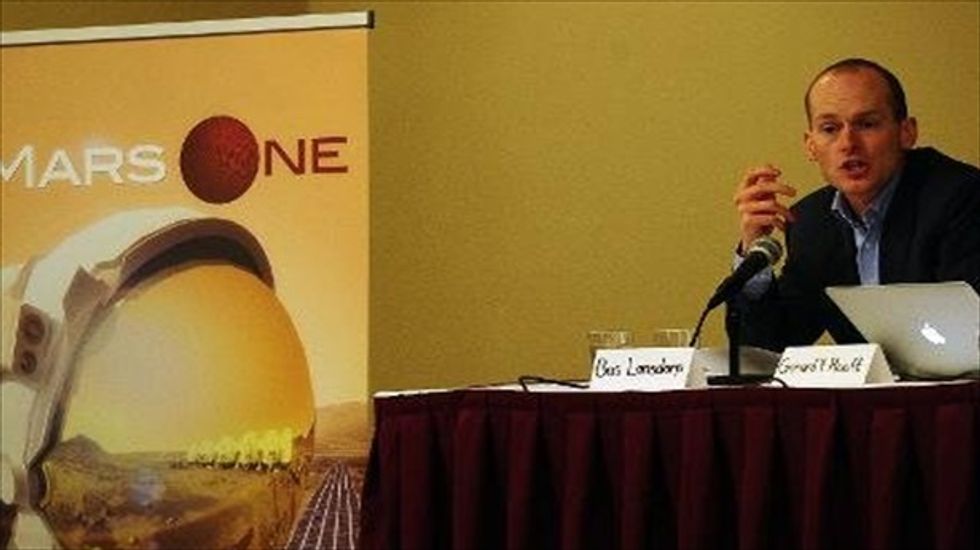 A Dutch entrepreneur's bold quest to colonize Mars won high-profile support Tuesday from a US aerospace giant, although the timetable for putting humans on the red planet has been pushed back two years.

Mars One chief executive Bas Lansdorp said Lockheed Martin would, for $250,000, produce a "mission concept study" for an unmanned Martian lander that would precede the $6 billion manned mission.

Britain's Surrey Satellite Technology will meanwhile turn out a similar study, for 60,000 euros ($80,000), for a satellite that would hover in orbit over the lander and relay data and images back to Earth.

Plans call for the unmanned lander to reach Mars in 2018.

But as for the ultimate goal of putting humans on Mars, Lansdorp told reporters in Washington that "our first humans will land in 2025" -- two years later than he announced earlier this year.

The first four earthlings-turned-Martians would be joined every two years by additional groups of four or more astronauts -- all on one-way tickets to space's next frontier, he said.

Some 200,000 people have already applied to go to Mars, Lansdorp said, and they will learn by the end of this year whether they have passed the first-round selection process.

Lockheed Martin, which made $2.65 billion in fiscal 2011, mostly from defense contracts, built NASA's Phoenix robotic spacecraft that landed on Mars in 2008 in search of evidence of water.

Ed Sedivy, the company's chief engineer for civilian space projects, said the Mars One lander would likely look like Phoenix on the outside, albeit with a carpet of thin solar paneling running off its side.

Inside, however, it would be fitted with the latest space electronics, said Sedivy, who was previously Lockheed Martin's point man for the Phoenix mission.

Although Lansdorp opened his press conference by saying "Lockheed Martin will build the first Mars lander" for Mars One, Sedivy said it had been contracted so far only for the concept study.

Besides conducting experiments, including a search for possible ways of creating water on Mars' surface, the lander will carry letters from youngsters on Earth to welcome the first Martian colonists, Lansdorp said.

He also envisioned a camera dangling from a balloon several hundred meters above the lander that would beam images back to Earth in real time.

Lansdorp expects it will cost $6 billion to put the first humans on Mars, where they will be expected to star in the galaxy's first interplanetary reality TV show.

He expects a big chunk of funding to come from "sponsors and partners" such as universities with experiments they'd like to see piggy-backing onto the mission.

A range of potential pitfalls might prevent Mars One from becoming a reality, including an inability to return to Earth, the small living quarters and the lack of food and water on Mars.

That assumes, of course, that radiation endured by its astronauts during the trip is not lethal, and that their spacecraft will be able to negotiate a volatile landing onto the harsh Martian landscape.

The project has garnered plenty of skeptics, but its supporters include Dutch Nobel laureate Gerard 't Hooft, who won the 1999 prize for physics and appears in a video for Mars One on the Indiegogo crowd-funding website.

The world's space agencies have only managed to send unmanned robotic rovers to Mars so far, the latest being NASA's $2.5 billion Curiosity rover, which touched down in August 2012.

If it succeeds, Mars One would be the first private-sector initiative, manned or unmanned, to explore another planet.