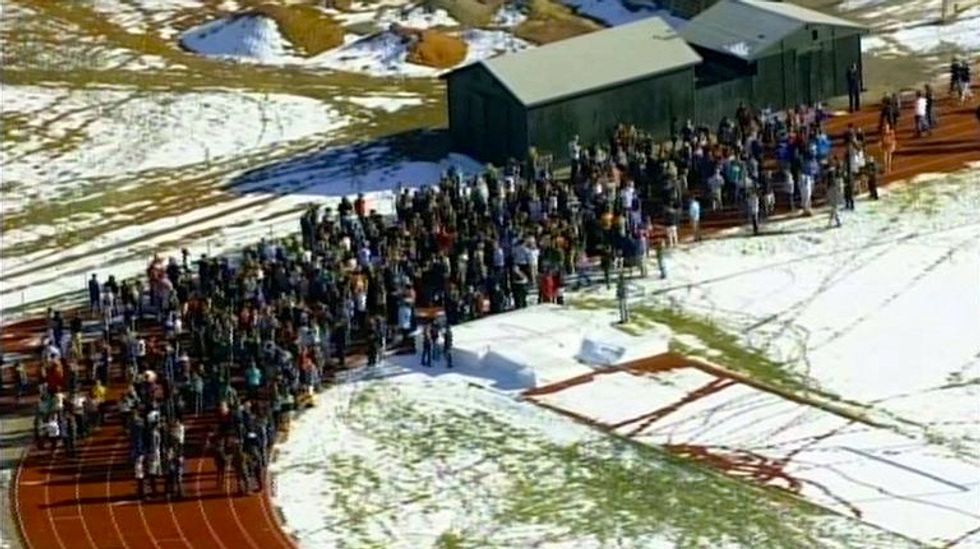 The teenage gunman who shot two Colorado students was armed with many rounds of ammunition, a machete and three Molotov cocktails for a planned commando-style attack, authorities said.

In a shocking rampage that officials said lasted one minute and 20 seconds, the 18-year-old Arapahoe High School student identified as Karl Pierson fired point blank at fellow student Claire Davis and shot another student before killing himself on Friday.

Davis, 17, was receiving treatment in hospital for severe head trauma. She was listed in critical condition and in a statement, her family asked for "continued prayers."

But it could have been much worse, Arapahoe County Sheriff Grayson Robinson said.

"The individual also had multiple rounds of shotgun ammunition strapped across his body, and he was also armed with a machete," he told reporters.

"It is our strong belief that (the gunman) came to this school with that weapon and multiple rounds, and his intention was to utilize those multiple rounds to cause harm to a large number of individuals."

The latest tragedy took place just a few miles from the sites of last year's Aurora cinema shooting that left 12 people dead and scores wounded during a Batman movie screening, and the 1999 Columbine bloodbath in which 13 were killed as well as the two student gunmen.

The Arapahoe High shooter had purchased his gun legally at a store under Colorado law on December 6, Robinson said.

The incident came a day ahead of the first anniversary of the Newtown shooting in which Adam Lanza gunned down 20 young children and six adults at Sandy Hook Elementary School.

A group representing parents of those victims said it was "horrified" by the latest shooting.

The Newtown attack briefly reignited the US gun control debate, triggered every time there is a major shooting, but attempts to pass tougher laws have made little headway in Congress.

The partisan review of the 2020 presidential election by former Wisconsin Supreme Court Justice Michael Gableman — which is based on unfounded claims of election fraud — is straining local election administrators and damaging the state's political process, according to Dane County Clerk Scott McDonell.

For weeks, Gableman has flipped back and forth over whether or not he will require clerks across the state to testify, in private, in front of him and his staff. He's also flipped back and forth over his ability to provide immunity to those who testify or even if he has the power to prosecute people as an appointed special counsel. He has also requested thousands upon thousands of records that don't exist, have already been turned over to the Assembly elections committee or would damage election security in the state if clerks complied with Gableman's requests, McDonell says.