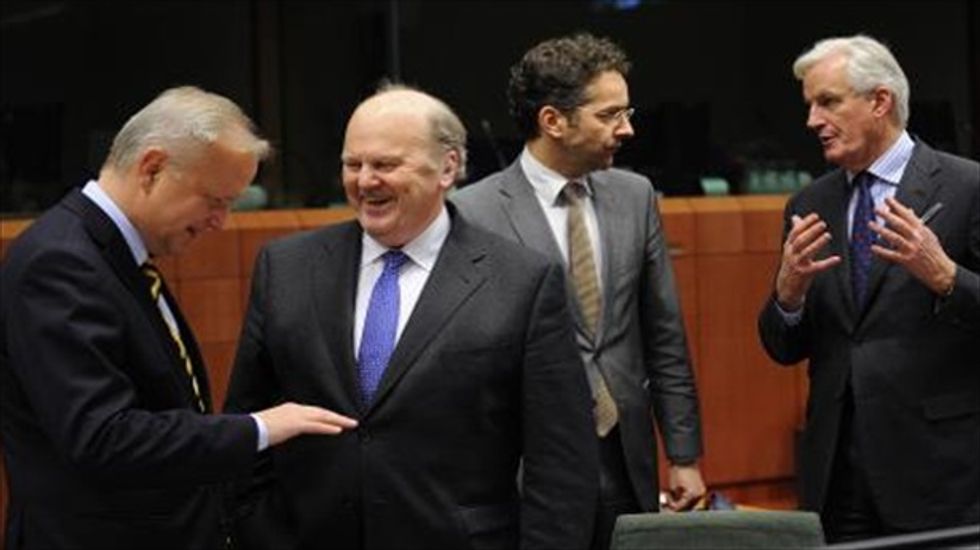 European Union officials chat before a meeting at EU Headquarters in Brussels on Dec. 17, 2013 [AFP]

Eurozone finance ministers met Tuesday to thrash out final details of a new bank regulatory system amid still sharp differences over how it should work and who should control it.

The talks -- the latest in a long running series -- are meant to produce a common position for negotiations Wednesday when the 17 eurozone ministers join their 11 non-euro counterparts.

The 28 ministers are in turn supposed to finalise an agreement to be then approved by EU leaders Thursday and Friday to usher in the much-vaunted "Banking Union".

"We will make another try ... so that we can perhaps come to an agreement tomorrow," German Finance Minister Wolfgang Schaeuble said as he arrived for the meeting.

"Our work is still as difficult as ever, we are progressing, but we still have different opinions ... there are points on which we must find a common position," Schaeuble said.

The SRM will work alongside the already agreed Single Supervisory Mechanism -- handled by the European Central Bank -- which is to oversee the top 130 eurozone banks directly, and thousands more indirectly via national authorities.

The resolution mechanism would also have a pot of cash -- funded eventually by the banks themselves -- to cover the cost of winding up a bank so the taxpayer does not have to pick up the bill.

In line with French wishes, the European Commission, the EU's executive arm, will have nominal control of the SRM.

But Germany wants national governments to have the decisive role and to ensure this, the SRM will have a stand-alone board which will make the actual closure decision instead of the Commission.

In this system -- which some has criticised as overly complex -- national governments have ultimate control of the SRM board decisions.

Moscovici also highlighted the issue of the SRM's fund, which he described as "the most difficult subject ... we must finalise it and how it works".

As with the SRM, the question is of control -- whether it should be a central fund or be run by the member states.

The current proposal would see the money available controlled by national bank resolution funds to start with but these would be phased out over 10 years to leave a single pan-European fund to back the SRM.