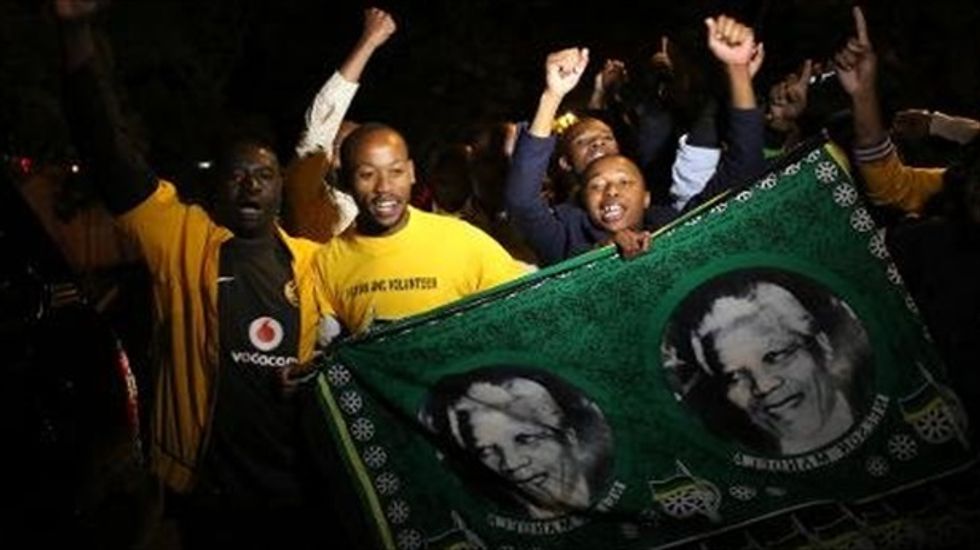 Statesmen, resistance leaders, Nobel laureates and prisoners of conscience have died before, but never had one man united such global unity in honoring his passing.

Foreshadowing the guest list of what will surely be the most important funeral of recent decades, world leaders queued up to issue solemn tributes to the 95-year-old anti-apartheid leader.

"He no longer belongs to us; he belongs to the ages," US President Barack Obama said, in a deliberate echo of an early tribute paid to Abraham Lincoln, the American leader who emancipated the slaves.

Over and over, leaders returned to the dignity Mandela displayed during his long imprisonment by South Africa's former racist regime and then later, when he led his country to majority rule.

"We will not likely see the likes of Nelson Mandela again," said Obama, America's first black president, citing Mandela's release from prison as one of his own early political inspirations.

"Many around the world were influenced by his selfless struggle for human dignity, equality and freedom. He touched our lives in deeply personal ways," Ban told reporters.

British Prime Minister David Cameron, who in 2006 apologized for what he said were the "mistakes" of his Conservative Party in its response to apartheid in Britain's former colony, was also moved.

"A great light has gone out in the world," he said in Downing Street. "Nelson Mandela was a towering figure in our time; a legend in life and now in death -- a true global hero."

French Foreign Minister Laurent Fabius dubbed Mandela "a charismatic giant", adding: "The father of South Africa has died, the driving force for freedom and for reconciliation."

Retired political leaders who remembered Mandela during his 27 years of imprisonment or worked with him after his 1990 release were also effusive.

"Barbara and I mourn the passing of one of the greatest believers in freedom we have had the privilege to know," said former US president George Bush, who invited the released Mandela to the White House.

"As president, I watched in wonder as Nelson Mandela had the remarkable capacity to forgive his jailers," he said.

Another former US leader, Bill Clinton, tweeted a picture of himself with his "friend", and said: "Today the world has lost one of its most important leaders and one of its finest human beings."

In Africa and other parts of the world that shook off the shackles of colonialism, emotion was running high.

Brazilian President Dilma Rousseff said: "The example of this great leader will guide all those who fight for social justice and peace in the world."

Microsoft founder Bill Gates, who has turned over his business acumen and part of his fortune to battling disease in Africa, said he and his wife had been personally inspired.

"Every time Melinda and I met Nelson Mandela, we left more inspired than ever. His grace and courage changed the world. This is a sad day," Gates said.

There were also tributes from Hollywood, where a new movie based on the South African leader's autobiography "Long Walk to Freedom" has just been released.

?What an honor it was to step into the shoes of Nelson Mandela and portray a man who defied odds, broke down barriers, and championed human rights,? British actor Idris Elba said.

His fellow Nobel laureates were among those paying tribute, including the Egyptian former head of the IAEA nuclear watchdog Mohamed ElBaradei, who declared: "Let freedom reign. Humanity has lost its greatest son."

In the years since his retirement as South Africa's elected leader, Mandela became a magnet and an icon for celebrity activists fighting for social causes.

Brazilian football legend Pele declared Mandela "was a hero to me. He was a friend and a companion in the popular fight and the fight for world peace."

But for all the sentiment around the world, the emotion was strongest in South Africa itself, where the celebration of the life of the nation's greatest leader was tempered by concern to preserve his legacy.

"Over the past 24 years Madiba taught us how to come together and to believe in ourselves and each other. He was a unifier from the moment he walked out of prison," said Archbishop Desmond Tutu.