UPDATED: At least 88 people injured after ceiling of Apollo Theatre in London collapses 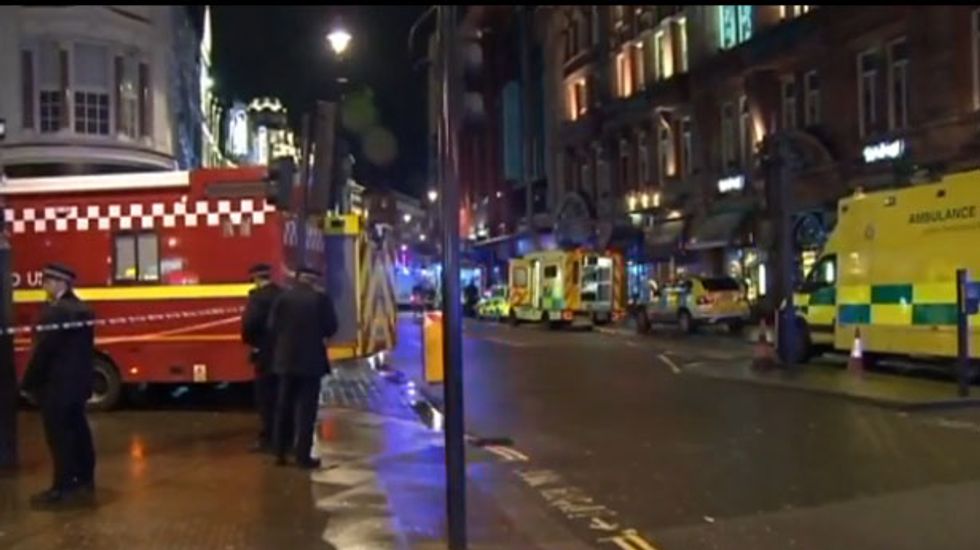 The ceiling of a top London theatre collapsed during a performance on Thursday, causing an unknown number of casualties, a police spokesman said.

"We were called to the Apollo Theatre in Shaftesbury Avenue to reports of a ceiling collapse during a performance. We are aware of a number of casualties, we don't know how many," the Scotland Yard spokesman told AFP.

Witnesses on local television and on social media said the incident happened during a performance of the hit West End show "The Curious Incident of the Dog in the Night-time".

Pictures on social media showed people fleeing the theatre with head injuries and covered in dust.

There were unconfirmed reports that part of the balcony had collapsed on members of the audience below.

Update, 7:21 p.m. EST: A fire department spokesperson confirmed to CNN that the theater had been cleared. He also said the ceiling fragment that landed in the theater fell about five stories. The interview, as aired on Thursday, can be seen below.

Update, 5:47 p.m. EST: The ceiling of a packed London theatre collapsed on the audience during a performance Thursday, wounding more than 88 people including children and leaving terrified theatregoers covered in blood and dust.

The incident happened at the Apollo Theatre during the West End show "The Curious Incident of the Dog in the Night-time" and comes the week before Christmas when London's theatres are traditionally busy.

Witnesses heard creaking noises in the 112-year-old theatre before the collapse but thought it was part of the show, before a section of the ceiling collapsed and brought down parts of the balconies.

Rescuers commandeered a red London double decker bus to transport some of the wounded to hospital, according to AFP journalists at the scene.

Emergency services said that they did not believe there were any fatalities and that all those trapped after the incident had now been freed.

"We have treated 81 walking wounded and seven more seriously injured patients at the Apollo Theatre incident," London Ambulance Service said in a statement.

There were around 720 people in the audience at the time, the London Fire Brigade said.

"A section of the theatre’s ceiling collapsed onto the audience who were watching the show. The ceiling took parts of the balconies down with it," senior firefighter Nick Harding said.

“In my time as a fire officer I’ve never seen an incident like this. I imagine lots of people were out enjoying the show in the run-up to Christmas.”

The London Fire Brigades Union said that an "ornate ceiling of plaster and wooden supports collapsed".

AFPTV reporters saw several people being stretchered away from the scene.

Others including some with bandages on their heads were being treated in the lobby of the nearby Queen's Theatre, where the musical Les Miserables was showing, which had been turned into a triage centre.

Desmond Thomas, 18, part of a school party watching the show, said they heard noises before the accident.

"Maybe 10 minutes into the performance we heard a tap-tap noise, we thought it was rain," he told AFP.

"There was a crack and then it suddenly seemed to get bigger and suddenly it collapsed. The next thing we knew the whole theatre filled with dust and smoke."

A thunderstorm had hit London in the hour before the incident.

London hospitals said they were on major incident footing.

Pictures on social media showed people fleeing the theatre with head injuries and covered in dust.

Simon Usborne, a writer for the Independent newspaper, said there was a "cloud" of dust obscuring the stage after parts of masonry appeared to fall away.

"There was panic, there was screaming," he said.

Martin Bostock said he suffered a head injury after he was hit by falling debris.

"It was complete chaos in the theatre. Absolutely terrifying and awful," he told Britain's Sky News.

"I was in the lower stalls with my family in the early stages of the show.

"I think the front part of the balcony fell down. At first we thought it was part of the show.

"Then I got hit on the head.

"We got out with cuts and bruises. I think most people did."

Update, 4:41 p.m. EST: Thirty people were injured after a London theatre ceiling collapsed on the audience during a performance Thursday, with most of them appearing to be walking wounded, paramedics said.

"We think at this time there are around 30 patients who are wounded, they are walking wounded. We do not appear to have anyone hospitalised at this time," a London Ambulance Service spokeswoman told AFP.