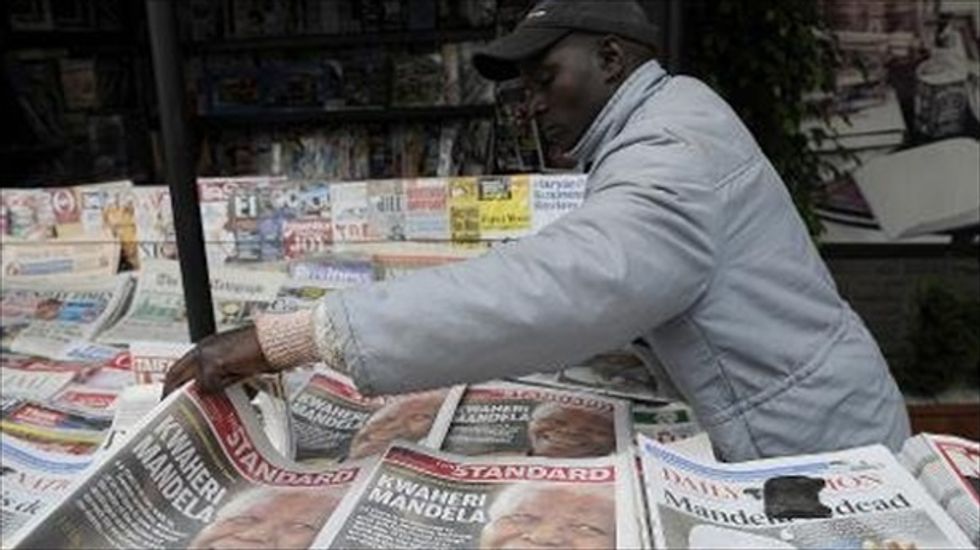 US President Barack Obama and his wife Michelle will travel to South Africa next week to pay their respects to the late Nelson Mandela together with former first couple George W. and Laura Bush.

Ex-president Bill Clinton, who was in office when Mandela took power to become South Africa's first black president, also said that he would be making the trip with his family.

White House Press Secretary Jay Carney said the Obamas would "participate in memorial events" for the iconic leader who died Thursday at age 95.

Carney declined to provide more details on the trip, saying more information would be provided once it becomes available.

South African President Jacob Zuma said a national ceremony in Mandela's memory would be held Tuesday in the Soweto stadium.

His body will then lie in state in Pretoria for three days before he receives a state burial on December 15 in his boyhood home of Qunu.

The Bushes will be making the trip together with the Obamas on the presidential plane at the current first couple's request, according to Freddy Ford, a spokesman for the 43rd president.

"President and Mrs George W. Bush have gratefully accepted the President and Mrs Obama's invitation to accompany them to South Africa on Air Force One and attend president Nelson Mandela's memorial services next week," he said.

The White House invitation was also extended to former president George H.W. Bush but the 89-year-old declined since he can no longer travel long distances, said his spokesman Jim McGrath.

"But he will be there in spirit, of course," McGrath told AFP.

Clinton confirmed that he, too, was headed to South Africa.

"Our whole family is going," Clinton told CNN, implying that both his wife Hillary, a former US secretary of state and one-time rival to Obama to secure the Democratic presidential nomination, and daughter Chelsea would be coming along.

"I wouldn't miss this," said Clinton.

"He was a genuine friend to me, and he was a really fine partner as president.

"So my whole family will be there, and we're looking forward to having the chance to say goodbye one last time."

Representatives for the other surviving former occupant of the White House -- Jimmy Carter -- did not immediately respond to a request about possible attendance plans.

South Africa declared a period of mourning for all of next week, starting Sunday with a "national day of prayer and reflection."

In a tribute shortly after the revered statesman's death was made public, Obama mourned Mandela as a "profoundly good" man who "took history in his hands and bent the arc of the moral universe towards justice."

"We will not likely see the likes of Nelson Mandela again," Obama said in a somber televised statement, hailing his political hero for his "fierce dignity and unbending will to sacrifice his own freedom for the freedom of others."

Obama, who ordered flags to fly at half-staff at the White House and public buildings, said Mandela, in his journey from a "prisoner to a president," transformed South Africa and "moved all of us."

The president on Friday phoned Mandela's widow to express his sympathy.

"This afternoon, President Obama spoke by phone with Mrs Graca Machel to express the condolences of the Obama family and the American people on the passing of her husband, Nelson Mandela," a White House statement said.

"The president thanked Mrs Machel for the profound influence that Nelson Mandela has had on him, and underscored the power of president Mandela's example for the people of South Africa and the entire world."

America's first black president met Mandela only once -- in 2005 when he had just become a senator -- but said he was inspired to enter politics by the anti-apartheid hero's example.