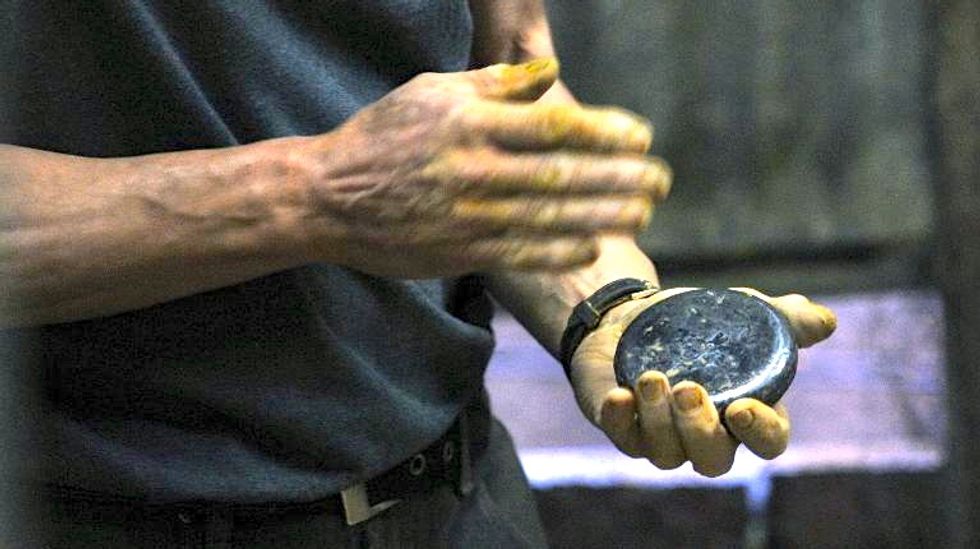 As sports go, it is rather old, quite boozy and a tad explosive. It involves trying to hurl a disc into a tube surrounded by small bags of gunpowder.

Tejo was first made popular by an indigenous people in Colombia called the Muisca, but is still played by thousands of enthusiasts in the South American country's Andean region.

The atmosphere is festive, as drinking beer during the competition is common, and players and spectators alike enjoy local delicacies like beef tripe stuffed with rice.

The disc, or tejo, is thrown from a distance of about 16 to 18 meters (yards) at a metal tube sticking out of a clay-covered board angled at about 45 degrees.

Around the hole are four triangular pouches of gunpowder.

The highest score is given for getting the disc in the hole and exploding a pouch along the way.

Lower scores come from just scoring a detonation or getting the thing in the hole, or at least getting it close.

The game ends when a player or his or her team -- the game can be played one-on-one or by teams of two players each -- reaches 27 points.

"I play every weekend with my friends," said Javier Borda. He celebrates every gunpowder pop joyfully, as if it were a goal in football.

Borda, of medium stature, has a hefty build but is nonetheless agile as he aims and throws the disc.

"It is a sport that was played by the indigenous peoples that lived in what are today the departments of Cundinamarca and Boyaca" in central Colombia, said historian Luis Moreno, a tejo buff.

Both men and women play. As in a discus throw, there is a rule as to how much of a running start players can get -- no more than 2.5 meters (eight feet).

The game is just half the fun. A carnival atmosphere fueled by beer and food surrounds all the play, watched by boisterous crowds.

"Here, you make friends, drink some beer, enjoy the afternoon, get dirty with the clay and forget your problems for a day," said Roberto Alayon, who takes pride in his aim.

Inviting spectators to join him in downing a beer from a case at his feet, he says he has had runs of 15 straight good shots in which he either got the disc in the hole, hit an explosive pouch, or both.

If none of those feats is achieved, a point goes to the player who hits closest to the hole.

The game is played both in rural areas and in cities in Colombia.

Booze flows freely, and typical dishes are wolfed down: small intestines from a cow, large intestines stuffed with rice, and special potato dishes.

"Here we eat a lot of vitamin ch," a cook named Hermilda says with a laugh. She is referring to pigs, known in these parts as "chanchos," and treats made from them like fried pork rinds.