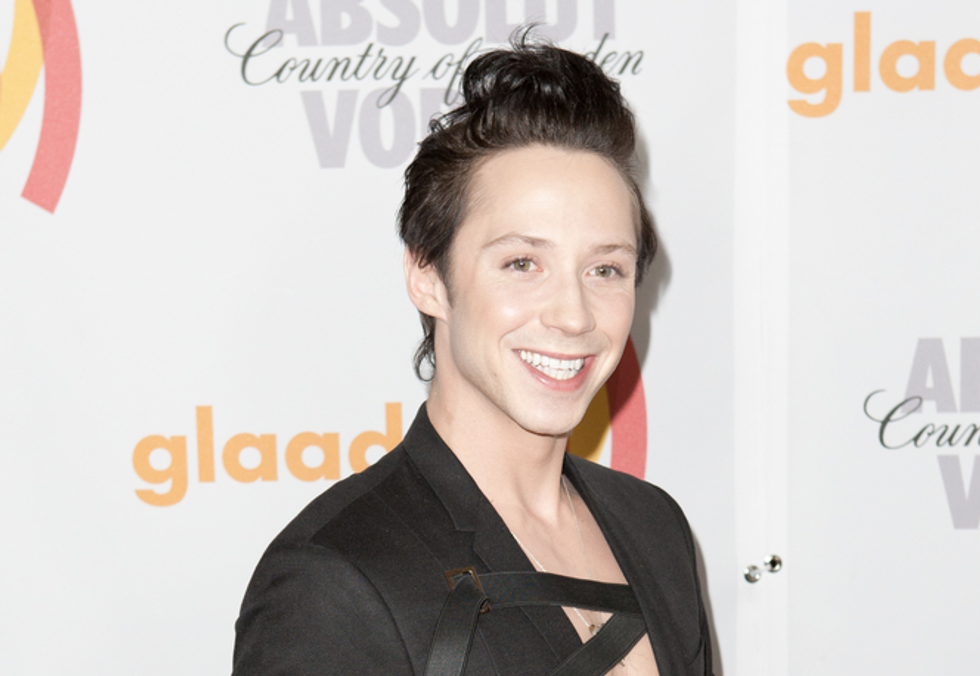 Flamboyant former Olympic figure skater Johnny Weir lashed out Monday at LGBT activists who oppose the United States' participation in the 2014 Winter Olympics in Sochi, Russia, calling them "idiots." According to New York City LGBT newspaper the Gay City News, Weir was speaking to a group of women students at Barnard College on December 2 when he made the remarks.

He urged the attendees of his talk not to be “idiots like the ones outside tonight, dumping vodka in the street,” a protest gesture that he deemed useless.

Activists who oppose the Sochi Winter Olympics and Weir's participation in the games as an NBC commentator, he said, "say all these stupid things" about the Olympics. Just because he is participating in the celebration of the Winter Games at Sochi does not mean that he sanctions the vicious anti-LGBT policies of the Russian government or the campaign of violence that has raged across the formerly Soviet republic.

Weir has repeatedly aroused the ire of activists for, variously, wearing a Russian military uniform to a television interview and repeatedly scoffing at the notion that LGBT athletes should take a political stand at the Olympics. He has told athletes that they must "respect the culture" of countries they visit and said that all of his own experiences with Russia have been wonderful.

“I’ve never had a bad experience in Russia,” he said, “not gotten called a fag or beat up."

Weir's Russian-born husband, Victor Voronov, has been the skater's gateway to what he calls the "inspiring" style of Russian culture.

“I still don’t study Russian politics,” Weir said blithely on Monday. “I don’t pretend to get Russian politics," but he said that foreign athletes who express their LGBT sexuality at the games should be ready to be stripped of their medals.

"You can have your gold medal stripped from you,” he warned.

Activists blasted the former Olympian for his privileged, out-of-touch take on the issue.

“We’re angry at him for not telling the truth about what’s going on in Russia to LGBT Russians and everybody else who dissents, who are being brutalized,” said Ann Northrop of Queer Nation. “He is selling out millions of people to satisfy his desire not to forgo his income or status. Is this what he would have done in Germany in 1936?”

Anti-LGBT thugs have attacked, tortured and murdered anyone they deem as practicing "non-traditional" forms of sexuality over the last several months. Just this week, film emerged of a group called "Occupy Pedophilia" torturing and humiliating 24-year-old Alexander Bohun, a gay contestant from Russia's version of the reality show "X-Factor."

According to the Advocate, "The disturbing video, which has since been edited but not removed entirely, shows Bohun admitting to trying to contact a minor, under threat of violence from Martsinkevich. The neo-Nazi then shaves Bohun's head down the middle in a 'reverse mohawk,' paints a rainbow on the gay man's head and Stars of David with an anti-Semitic slur on his bare chest, and forces Bohun to drink what Martsinkevich claims is urine. Martsinkevich then dumps urine on the man's head, in a series of assaults that mirror recent attacks on people perceived to be gay from South Africa, Iraq, and Ukraine."

The attacks are the street-level consequence of Russian laws outlawing "gay propaganda," i.e., any mention of portrayal of same sex relations as normal or positive. Russian legislators have passes a series of anti-LGBT laws with the overwhelming support of the population. Currently the government is debating a law under which same sex families in Russia can expect to have their children taken from the home purely on the basis of the parents' orientation. Months ago, Russia disallowed adoptions of the country's orphans to nations that allow same sex marriage.

With regards to calling protesters and activists "idiots," Weir said his feelings got the better of him.

“I applaud the protestors,” he said. “I apologize if I offended anyone."

Those people, however, "have chosen to be activists," Weir said. His form of activism is living his life openly with Voronov, he said. Weir has become a cultural icon and skating commentator in Russia where his gender-bending costumes and campy quips have endeared him to a population that would otherwise condemn him for his orientation.

[image of Johnny Weir on the red carpet via Photo Works / Shutterstock.com]

According to CNN, the Supreme Court has once again declined to take up a lawsuit asserting the 2020 presidential election was tainted by voter fraud.

On Monday, the high court declined to take up a case filed by Republicans that the voting in Pennsylvania was tainted by changes to voting rules.

During the segment, Smith noted that the Florida Republican Party, behind the scenes, is terrified that the investigation could sweep up more of their members.