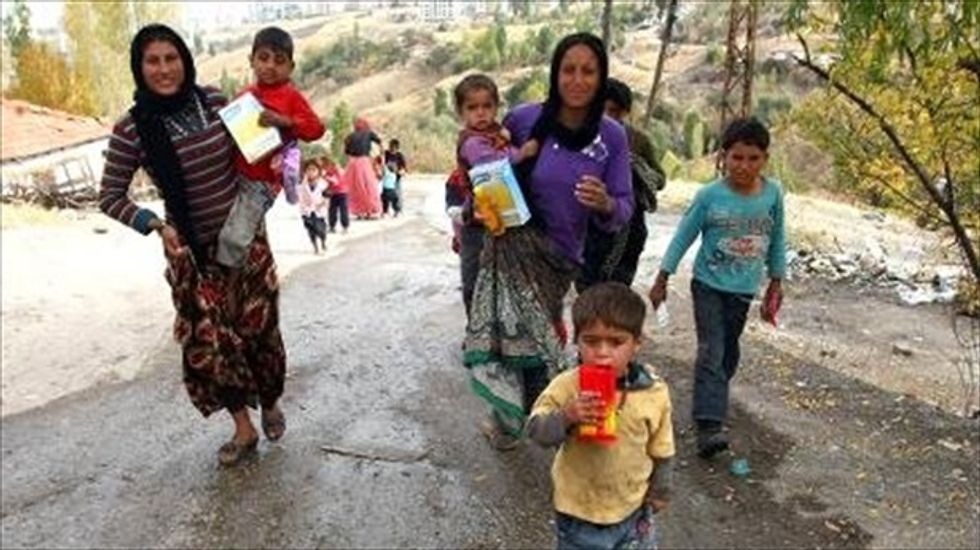 Syrian refugees, who fled the civil war in their country, walk with their children after receiving food aid in a makeshift camp in central Ankara on Oct. 12, 2013. [AFP]

"Oxfam will be doing the best they can by delivering winter kits to help many of the poorest families," said British actress Michelle Dockery who last month visited refugees in Jordan who have fled their country's conflict.

"But they want to be able to do much more and so we really need the public's help."

Oxfam, which aims to raise £1 million, or $1.6 million, for its emergency response, said: "Many people are only wearing the thin summer clothes they fled from Syria in, and those living in tents are sleeping on just a bare mat or thin mattress on the cold winter ground."

Its winter kits for refugees in Jordan and Lebanon include blankets, gas heaters and plastic sheeting. Cash aid and winter vouchers are also to be distributed in Lebanon.

Dockery, star of the worldwide television hit series Downton Abbey, said: "What I have seen and heard on my trip is hard to put into words ... Mothers told me their children are already unable to sleep because of the cold and it is only going to get worse" with temperatures falling.

The United Nations estimates more than three million people have fled Syria, mostly to neighbors Jordan, Lebanon, Turkey, Iraq and Egypt, since the conflict broke out in March 2011.